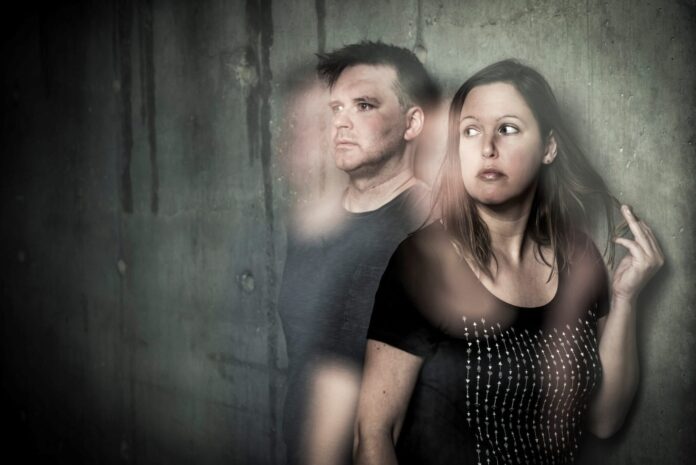 Ottawa’s Paragon Cause is an indie-electronica band with a penchant for making music that is enigmatic, mysterious and compelling. With the release of their brand new single, “Drop Me In” (see video below), we caught up with the duo to learn more about them.

From the Strait: What was it like to work with Sun Rose Wagner of The Ravonettes?

Paragon Cause: Simply put, it was incredible. We had no idea what to expect, would he hate our music? Love it? In our minds, he is a rock star. He is the most creative people we have ever met. What he hears in music is on another level. He hears beauty in noise. He hears rhythm in sadness. We brought emotion,  and unique songwriting to the sessions while he brought the energy. It helped take our music to another level. He challenged us to move outside our comfort zone.  From the first 10 minutes upon meeting, it felt right. Each day we would get together in our basement, talk about a song and then start recording. Usually, Jamie would record a guitar part, this would inspire Sune, who would get quiet with his headphones on and come up with a beat as well as something brilliant. This in turn inspired us. Michelle would record spontaneous vocals. We would talk and work as a three piece and get inspired more, more ideas and things would move fast. Most songs were recorded in 2-3 hours. It was very very organic and impulsive, a true rock album. In reality, it is the three of us. We all fed off each other. Sune would give us ‘homework” as well. One day, he told us to listen to the Ramones and get some inspiration and write a song. That night, we listened for hours and then wrote our second single, Save Me. Its not punk, but it is inspired by it.

We have a bunch of memories. There were times where Michelle would record a vocal for a song in one take, Sune would look back and with a mischievous smile say, “I think we got it.” Then he would do a rough mix of our new song and we would go upstairs and pump it on our stereo and dance. Of the 16 songs we wrote together, 13 were written during the sessions or the night before. The inspiration and energy we had together was incredible. Imagine one of your guitar idols playing air guitar to a song you wrote, that happened to us. After our first week, Sune left and a few days later, he texted us and asked what we were doing for New years. He drove back up for another week. We had so much fun. It went so well, we have plans to record our next album this January.

FTS: How did Paragon Cause become a band?

PG: Michelle was working as a supply teacher, after finishing a degree in Music. She didn’t play music for about 10 years. Jamie was a musician back in Halifax and then decided to attend university for 10 years. Both of us had a similar experience with our loss of music, yet different circumstances. Michelle was in a haze of control while Jamie was in a haze of normality.

We both decided we wanted to get back in music at the same time without meeting. We both put our profile on a site called Bandmix and connected. We got together one day and jammed on the song, Norwegian Wood by The Beatles. within 30 seconds, we knew it was meant to be. It was pure magic. We recorded our first song, Next Time, in the first month. After that, it just continued.

FTS: What do you hope listeners will take away from “Drop Me In”?

PG: We hope that people will appreciate the music and that we are not afraid to let a song be a song. We could have produced that song with more rhythm, more instruments, more of everything but the three of us realized, this is a simple song. Let’s make it  beautiful.  Let the listener get lost in it. We wanted the vocals and harmonies to suck people in and think about the lyrics. We want people to know that we have gone through tough times, and that it is ok to ask for help.  You have friends that you may not know have dealt with depression, anxiety, abuse, control and everything else involved in the human existence.
It refers to letting a friend drop in and help, they were there once too. They can see you coming back, they know you can do it and they are happy to help.

FTS: We like to play a game called “This or That” with musicians. So here’s an easy one for you: pizza or tacos?

Check out Paragon Cause‘s brand new video, “Drop Me In”: