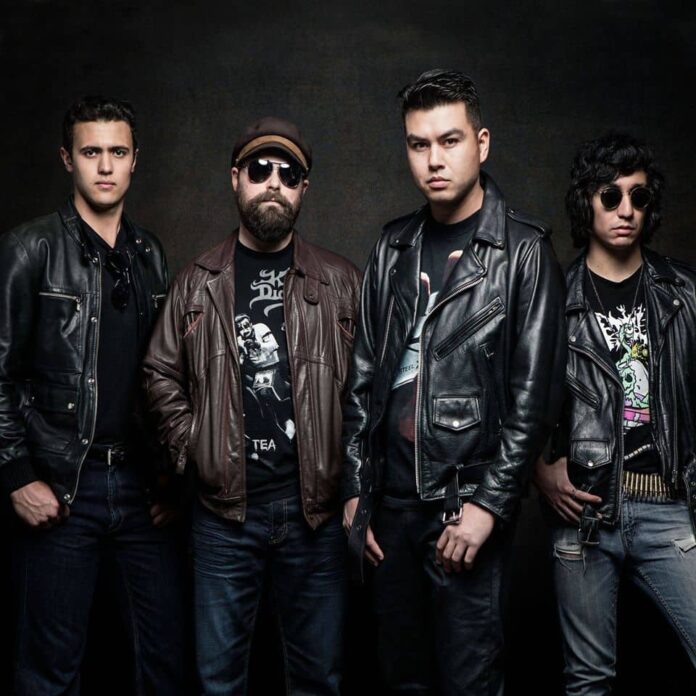 Nervcast is givin’ you their notice. The Toronto-based hard rock band recently released a video for their latest single “Two Weeks”, off their Two Weeks Notice EP – and it’s one you’ve gotta see. This is a tune that pretty much anyone can relate to. We had a chat with bassist Galen Weir about the video, the band’s dream festival bill, & musical guilty pleasures.

From The Strait: We dig the video for your latest single, “Two Weeks”. Tell us about the idea behind it, and what it was like to shoot it.

Galen Weir: The “Two Weeks” video has all of us in the band working various jobs (from landscapers to birthday clowns) looking bored, getting yelled at, goofing off, and taking our aggressions out on a workplace printer. The song conveys the simple and universally identifiable feeling of dissatisfaction and disinterest towards the monotonous 9 to 5 grind.

We filmed it all in a residential area in Richmond Hill earlier this fall over a couple Sundays. Everything seemed to come together to make it a fun and relaxed set. Even as we were being filmed playing on the front lawn getting scorned by an actor (Eli Garcia), the real-life neighbours would begin to emerge from their homes and after each take instead of fielding complaints from the locals we were being applauded by everyone in the neighbourhood from young children rocking out, to their grandparents just happy they’re not staring at a screen. We also got a huge contribution from Everett’s family not only providing location but appearing as extras too. It was an extremely fun shoot and I believe that’s why the finished product is so fun to watch.

FTS: If you could headline your own festival, what bands would be on the bill with you? Any genre, alive or dead, no rules.

Galen: Oh wow, I think first and foremost playing a festival anywhere is extremely exciting! But an all time bands list… in our wildest dreams? Where to start? Gotta have Pantera, simply for the sake of being able to see them play live (would be beyond daunting to follow that act though). GnR, Zeppelin, AC/DC, Black Sabbath, Megadeth, Metallica, Alice In Chains…so many influences for us, it would be a ridiculously long festival to fit everyone!

FTS: How did Nervcast get together?

Galen: The four of us met up one by one over a long period of time which I suppose can first be traced way way back when Everett was my next door neighbour growing up. We played in different bands together over the years, eventually having Kevin and finally Matt join the fold in more recent years. By the time we were writing what was to become Nervcast’s first album Locked And Loaded in 2017 we decided, since it was going to be our first studio album with this lineup, that it was time to turn a new leaf and release it as a new band under a new name.

Recording, mixing, and mastering Locked And Loaded probably took us less time than agreeing on what the band would be called, but one way or another we arrived at Nervcast and have been spreading the word and making a name for ourselves ever since.

Galen: Not sure if they’re necessarily guilty pleasures but I think all of us have albums in our collections that stray from what we play as a band. It’s no secret I also like jazz, and Kevin reps his 80s glam…I guess those would count as musical guilty pleasures? On road trips to out-of-town gigs when the iPod is on shuffle some random stuff pops up for sure.

Check out the video for “Two Weeks” below, and if you’re in (or around) Toronto, be sure to catch Nervcast on December 7th at The Rockpile in Toronto with Sven Gali!