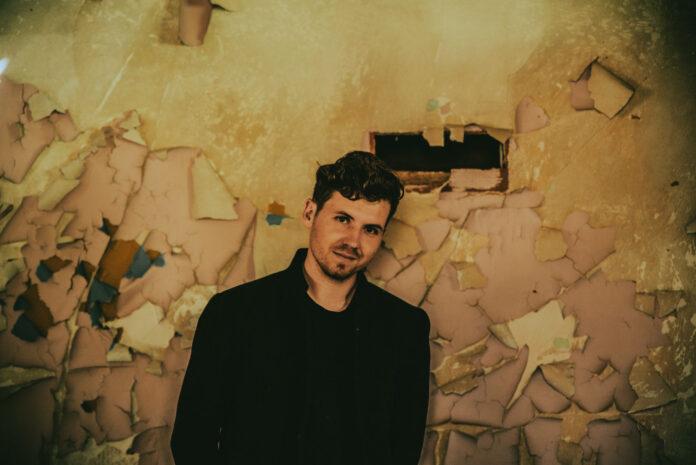 Well known as a touring drummer for multiple Canadian bands, musician Michael Wilford decided to branch out into singing and songwriting – now a successful solo artist in his own right, he’s just released his third single “Esraela”. We caught up with Michael to chat about the song, his dream tourmates, and his songwriting process.

From The Strait: Tell us about the new single, “Esraela”.

Michael Wilford: Esraela is a song about love and the rediscovery that can come with a long term relationship. It was inspired by my own relationship with my highschool sweetheart and by those strong and beautiful relationships I witnessed in my family and friends. I find that there are moments where I find myself falling again, in a whole new way, but also kind of in the same way (it’s hard to explain) for the person I’ve been with for years now. I don’t mean in any way that there has been any loss of love, or we’re having to fall in love again, but it’s a feeling of falling more, and strengthening and rediscovering what is already there.

I really wanted this song to feel mysterious and full of discovery. The story begins when Esraela sits beside the narrator on the train and a whirlwind romance ensues, but as we hit the chorus and the lyric “meet me tonight for the first time again, kiss me as if your lips don’t know mine yet”, we realize that they aren’t strangers but are rather reasserting and redefining their feelings for one another. I wanted this song to feel classic and for it to have a bit of a crooner sensibility, with the saccharine lyrics but also the swagger and confidence you can find in a Frank Sinatra track. However, I also wanted it to feel modern and have a rock and roll edge, and that was a fun needle to thread.

FTS: If you could tour with any band or artist (any genre), would it be and why?

Michael Wilford: I would love to go on tour with Arctic Monkeys, but it’s really so hard to choose just one. Maybe it could be a tour that involved some festival dates and we could play a string of dates and then hit up Glastonbury and hang out with Paul McCartney and Taylor Swift and people like that. My favourite part about being on tour is getting to meet artists and bands I admire and pick their brains about subjects I’m passionate about and learn from them. I think Arctic Monkeys and Alex Turner especially are such talented songwriters, but also are really aware of what makes a great rock song for modern audiences. I’ve been in love with their last two albums and their willingness to be experimental and playful. Tranquility Base Hotel and Casino is filled with playfulness but I also think moments like the bridge of Knee Socks on their album AM is really clever and exciting.

Michael Wilford: It really depends on the show, I play a lot of shows so for the most part I don’t really get nervous. A lot of the time I’m getting on stage with a band I’ve played a lot with, performing material I know really well and playing alongside really talented players so I know that the work has been done to be prepared and the rest of the job is now putting on a show. That being said I do get nervous sometimes when I’m playing with a new project or songs I don’t know as well, so I just have to remind myself what the job I’m there to do is. I find being really literal and simple with it is helpful. “I’m here to play the drums and put on a high energy show and I am very capable of both of those things.”  That being said, I did just play a few really intimate gigs as a last minute substitute this last week. It was with some players I really admire and playing songs I was learning half an hour before the set. There were definitely some nerves involved there. But at the end of the day, everyone is there for the same reason, to have a great time and to be part of a great show, everyone is up on stage making little mistakes and we can only play as well as we can in that moment, so it’s up to us to practice, prepare and then show up and work hard onstage.

Michael Wilford: Recently my songs have mostly started with me and a piano in my living room. I used to write a lot with other people, but I have really been enjoying starting the track by myself and then bringing in collaborators to work on details and exciting arrangement ideas I have.

Normally the creation of a song looks like this. I write and create a demo of the song. I like going all out on the demos and throwing every idea I have at the track, basslines, guitar parts, string arrangements, horn parts, whatever I can think of. Then it’s a matter of stripping back the ideas that aren’t necessary to the song. I’ll usually show the song to some of my close friends at that point. Joshua Litton is usually the first person to hear the new music. He’s one of my best friends and is an amazing multi-instrumentalist who can play something like 17 instruments and he and I work really well together. He also has a knack for writing the best riffs. Once Joshua and I have it feeling pretty tasty I’ll start bringing in other musicians to either perform the parts we’ve written, or in the case of Esraela, bring some new ideas to the table.

For Esraela I initially wrote it with Joshua and we sent it through the paces. At one point it was a folk song led by a mandolin, then it became a big band jazz/pop crossover, then it was stripped back to stand up bass and finger snaps, it was really boggling us how to present it best. Elijah Quinn came in to help realize the song and we found a laid back Alt-Folk version that was really cool, but I really wanted it to have a bit of swagger and Brit Rock Attitude. So I sent the song to Chris Lloyd and he gave it a bit of a swanky guitar riff in the first verse that I felt really sent it in the right direction. At this point Ben Erikson came in to co-produce the song with me. He’s an incredible producer and he helped me edit the song from a 6 minute track with multiple verses and some big band elements into the tighter and more radio friendly version that we have now. Both he and Chris also challenged me to write a new bridge which was the last element added to the song, probably only a month or so before we recorded it. I knew Elijah had to be the person to sing it, he has this amazing quality to his voice that has this kind of sexy rock and roll thing, but also some real sensitivity. He ended up engineering and recording his vocals from his home studio in Smithers, BC while Ben and I were in Victoria and Toronto producing over a Zoom call. Then we did the same for Molly Moolman’s backing vocals. The rest of the band recorded our parts at Barnhouse Sound in Qualicum Beach, on Vancouver Island. Ben was on the Island for the holidays and in the middle of a freak snowstorm that shut down the whole city the band drove over the Malahat to hide away in a recording studio for a few days. Ben then took the song to Toronto to mix and we ended up adding Michael Fong on synthesizers over there. It’s things like this that sometimes make this project difficult, collaborating with people from all over the country, but I love the little details in a song like that and I love being able to be flexible and work with my favourite musicians regardless of what part of the country they are in.

Michael Wilford: I really love the cool alternative music coming out of Canada. I’m always so inspired by bands like Half Moon Run and Arcade Fire and I listen to them alot. There’s also some really incredible artists on the west coast that I think deserve more recognition. I love Adrian Glynn’s music, both solo and with his band The Fugitives. I also really love Sail Cassady, Sarah Osborne, History of Gunpowder, Old Soul Rebel, Kandle and Carmanah. I’m even lucky enough to play with a few of those.

Check out “Esraela”, the latest single from Michael Wilford!