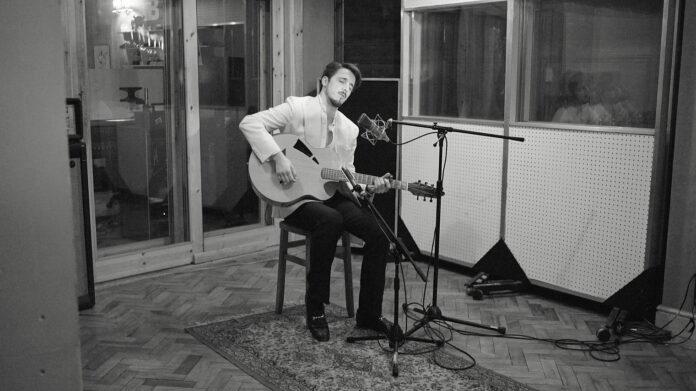 Hailing from Kent, UK, Luke Fraser is a singer-songwriter making music that bridges the gap between contemporary and retro. With his latest single, “Things Can Only Get Better”, Luke created a song with a 70s vibe while simultaneously fitting right in with any heavy-hitters currently on top of the charts. We caught up with Luke Fraser to chat about the single, how he battles writer’s block, and the one album he can’t get enough of right now.

From The Strait: Tell us about the new single, “Things Can Only Get Better”.

Luke Fraser: I wanted this song to exist as one of those rabbit/duck optical illusions: a joyful song but with a subtle darkness to the lyrics that could alter how you interpret it. I hoped to reflect the ambiguity of the late stages of my previous relationship, where I felt simultaneously hopeful and despairing.

FTS: This single is from your debut solo album, but you’ve been making music for a long time. What first made you want to be a musician? Was it a song, an artist, or just an undeniable pull to make music?

Luke Fraser: I’ve always felt drawn to making stuff. When I was a kid I wanted to be a writer, but I got into writing songs as combining words with music gave a whole new dimension to explore. Now music is all I think about and I couldn’t imagine doing anything else.

FTS: All artists (save for the exceptionally lucky ones) experience writer’s block from time to time. As a singer-songwriter, how do you battle through a block when songwriting?

Luke Fraser: I tend to wait it out and focus on other things until it comes back; there are times when my brain just won’t have anything to say, and that’s totally fine!

FTS: How do you usually discover new music?

Luke Fraser: Spotify tends to show me lots of cool things; its algorithm is one of the few that I don’t really mind knowing me intimately. Otherwise, my friend’s keep me well supplied with weird and beautiful musical finds.

Luke Fraser: Neutral Milk Hotel’s ‘In The Aeroplane Over the Sea’. It was one of my musical blind spots for a very long time, but after finally having a proper listen I just think its totally gorgeous and totally surreal.

Check out “Things Can Only Get Better”, the new single from Luke Fraser!