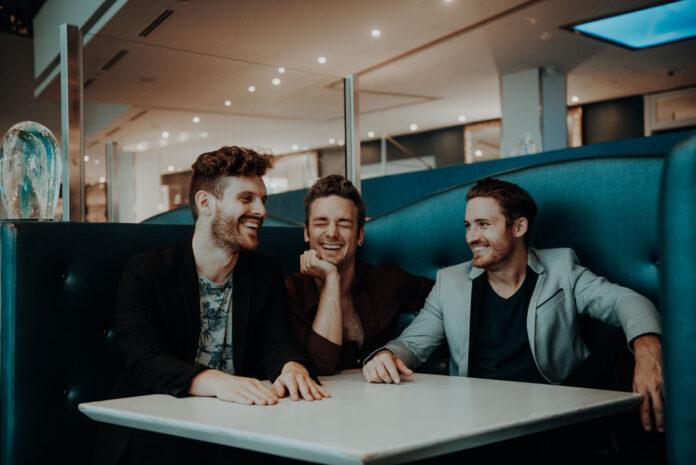 Niagara trio James Blonde are back with the first single from their upcoming LP, a pop-tinged alt-rock song about the importance of a well-timed night out with the right people around you. “Back to Life” brings the energy with a catchy chorus, electronic elements, and some serious guitar riffs. We caught up with James Blonde to chat about the single, how they decide who acts as frontman for each song, and the mysterious dancing star of the new music video.

From The Strait: Tell us about the new single, “Back to Life”

James Blonde: Back to Life came together last year near the end of a lockdown. I (Phil) had a beat and an idea whilst Neil was trying out sounds on our new keyboard at band practice. The song basically all came together instrumentally in that one jam – we had been listening to a lot of Vulfpeck & The 1975 and I was listening to a lot of Peter Gabriel, so those were a big influence on that bass/80s funk vibe. The chorus line of “Back to Life” and the harmonies had even come together that same day. We recorded a little voice note on my phone of it to remember the idea. That same week while driving I heard an announcement on 102.1 the Edge for some live concerts coming back and restrictions being lifted. The excitement from that news – paired with this new jam we recorded inspired the lyrics and melodies that I wrote while singing along to the voice memo. I pulled over and quickly recorded a demo vocal that I showed the guys and the song was complete! It was a song born from the excitement to play in front of people again!

FTS: In this track, Phil is taking his turn as frontman – how do you decide who will be taking over vocals in different songs, now that you’ve all done it?

James Blonde: That’s a great question! It usually comes down to attachment to song or lyrics, and the main writer/leader on the song. We all contribute to writing every James Blonde song, but sometimes one of us takes the lead on the vision/direction musically. Usually whomever writes the lyrics or has the initial brainstorm of the song takes the lead vocal. However, some songs will be written or spearheaded by one of us, but we realize somebody else’s voice just fits better. Our upcoming Album has a song called FOMO, where the chorus was mostly Steph’s ideas, I (Phil) wrote the lyrics to the song and Neil worked on the verse melodies – we did a couple demos to compare vocal stylings and we collectively decided that Neil’s voice just suited the song best! We just want to make the best songs we can – so we check our egos at the door while writing and we work together to find the best fit.

FTS: Your video features some serious dance moves, both from you guys and from a mysterious co-star. Tell us about the dancer, and also the process of making the video.

James Blonde: Anthony Yorfido is THE MAN! He’s a friend of ours since early high-school and our #1 Fan. Anthony has probably come out to more of our shows than anyone and he’s got the most infectious energy and dance moves! The Music Video concept was initially just going to be a performance-style video to showcase the band’s live energy, but we felt like it needed a bit more. So while brainstorming ideas we thought of Anthony, who draws a crowd on the dancefloor every time he’s busting a move! His energy and dance moves are so infectious that we figured he perfectly embodied the message and vibe of the song: the infectiousness and excitement of live music! He’s also been such a long-time friend that we had been wanting to include him in a Music Video for a while, and this just felt like the perfect opportunity.

FTS: Who are some of your all-time favourite Niagara artists?

James Blonde: Well as a drummer, Neil Peart tops the list, with Alexisonfire being a close second – there was a time where almost every drummer in the world was learning the opening drum part to “This Could Be Anywhere in the World” which is a testament to Jordan Hastings’ top tier drumming. Otherwise there is some incredible up-and-coming acts in Niagara, we love the Feverish Lemons who’ve been finding wicked success on Twitch streaming, Sleepy Jean who writes some beautiful timeless songs and we love the pop sensibilities of Lastli. We also can’t forget the incredible musicianship and ripping guitar solos of JIN. I hear there’s also a cool new rock project called Lonely Little Kitsch!

James Blonde: There’s a few! The Coolest had to have been our début concert for NYE 2017 in Niagara Falls opening for Sam Roberts and Serena Ryder – it was cold and we had freezing rain, our pedalboards were covered in clear plastic bags to protect the electronics, and playing my soaked drums felt like I was part of the Blue Man Group! There was still over 10-15k people there despite the weather, which was an incredible thrill for our début as James Blonde. Our weirdest show was our first time ever in Philadelphia, PA – we headlined a student-run talent show/open mic situation in a blackbox theatre at Drexel University. There was a surprisingly big crowd of arts students, we played one of our best shows through a makeshift PA system and surrounded by students like it was a house party. The energy there was incredible, but such an unexpected event to have played, and to top it all off, we met Morgan Turner (from the Jumanji movies) who bought a CD!

Check out “Back to Life”, the new single from James Blonde!