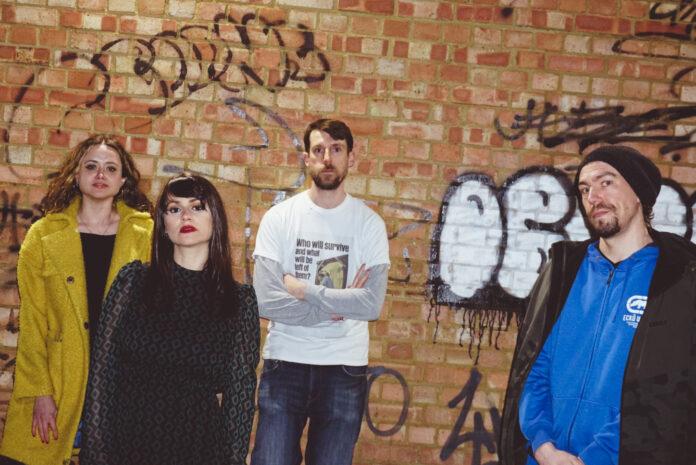 With their latest EP, Not All Men, UK band Femegades are continuing to bring in new audiences with their grungy riot grrrl sound, fittingly described as “if Bikini Kill and The Clash had a lovechild raised by Courtney Love”. They’ve just released their new single “Speechless”, so we caught up with the band to chat about the song, their current favourite under-the-radar artists, and musical influences.

From The Strait: Tell us about the new single, “Speechless”.

Femegades: It is the first single from our second EP “Not All Men”. And is a challenge to anyone hiding behind that phrase ‘but not all men’, asking them if they are really as squeaky clean as they need to be to use it with any justification.

FTS: How would you describe your sound to anyone who hasn’t heard you before?

Femegades:  A bit of punk, grunge and I would say some alternative vibes in there. We tend to float between those sounds, hopefully it all sounds like us at the end of the day.

FTS: What are some under-the-radar bands or artists you love, and want to share with our readers?

Femegades: We played with two great female two-pieces at our last gig: Tarah Who? and Wolfs.

A couple of others we discovered recently thanks to Loud Women Club are Sister Ghost and ARXX. Check out ‘Buried Alive’ by Sister Ghost for some classic AIC vibes, and ‘Deep’ by ARXX which is another fixture on our Spotify.

Femegades: 90s grunge would be our number one influence… Bikini Kill, Nirvana, Veruca Salt, L7 both in terms of trying to find a simple, raw and powerful sound. But also in terms of ethos and helping shape what the band stands for. Would also credit Fugazi and the punk scene they came up from for that. Outside of music, discovering a more radical feminism has really opened our eyes to issues around exploitation etc. and that has a massive influence on our writing.

FTS: If you had advice for new musicians just starting out, what would it be?

Femegades: Don’t quit the day job. There’s so much expense in making music and getting it in front of people these days, and so little financial reward.

I think not having an income you can at least partially devote to those costs would be hugely prohibitive.

Check out “Speechless”, the new single from Femegades!