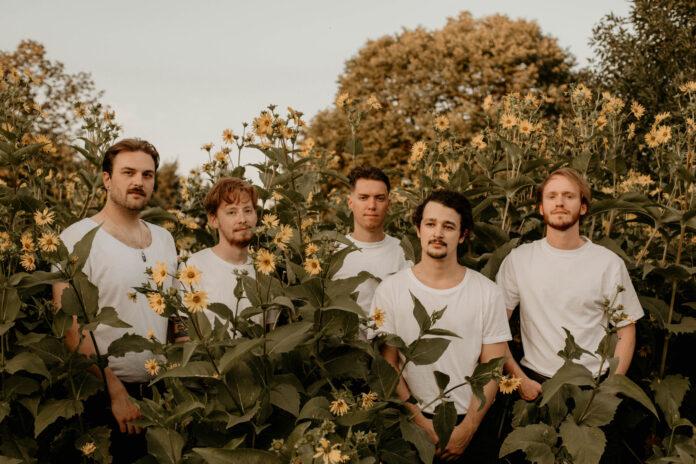 Guelph 5-piece alt rock band Excuse Me. are steadily releasing new songs and creating a buzz about their sound. They’ve just released their latest single, “The Miser”, so we caught up with band member Dylan Creed to chat about the song, his musical guilty pleasures, and ways to overcome pre-show jitters.

From The Strait: Tell us about the new single, “The Miser”

Dylan Creed: The Miser is an extremely laid-back Alternative tune that presents introspection on feelings of possession. The form of this song was written while testing out this Oberheim DMX drum machine I had recently picked up. Our lead singer, Aleks, was playing his DSI Prophet 12 and singing, while I played around with the drum machine and bass. I think it literally took us 2 hours to establish the idea, but we both loved how it came together. One of our initial ideas for the song was to eliminate the classic verse-chorus layout, so I figured a refrain would work best instead of a chorus to kind of leave a break in between verses. Our guitarists Adam and Heyden both added their personal flare to the tune, which really added so much space to the second verse leading into the outro, and then there’s a really cool Korg MS-20 part we recorded for the ending that you can hear under Heyden’s guitar solo. After all that effort, Aleks mixed the track into the release you can now enjoy on your streaming platforms!

FTS: How did Excuse Me become a band?

Dylan Creed: We all met while enrolled as students at The University of Guelph! Excuse Me. was first a solo venture by Aleks while studying at The University of Guelph. Following the release of The Homecoming EP, he had decided that he was keen on performing those songs live. Heyden was already friends with him, and recruited me and our former drummer Matt from The U of G Jazz ensemble that we were all a part of. Adam was also a friend of Aleks’ and Heyden through a first year recording course, which eventually lead him to play in the band as well!

Dylan Creed: I’d have to say one guilty pleasure is Audioslave, I used to get absolutely grilled by my pals for liking it, but how could you not enjoy Chris Cornell AND Tom Morello in the same group? Another notable mention would probably have be Aqua, our new drummer Joey and I both really love it. Even though their music represents peak 90’s pop, I think it still hits unbelievably hard hitting for its age.

Dylan Creed: I think it really depends on the number of people we’re playing to. When we play in front of a larger group, I hardly ever feel nervous. When I play in front of a small crowd, my nerves can get the best of me. I think it comes from being in a closer environment, and the fact that one unhappy fan could be sitting only a few meters away from me. Crowd reactions can definitely weigh down on how I perform and feel onstage, but I think the best remedy for me is to take a few deep breaths, and look back on all of the effort and work I’ve put into my career as a musician. This usually helps a lot because I’m genuinely proud of what Excuse Me. has managed to achieve over our 5 years as a band. With that said, I really do believe that anyone that tries for something like writing or performing music should be proud of their effort, regardless of their experience!

FTS: What Canadian bands have you been listening to lately?

Dylan Creed: My Canadian music influences as of late have been mainly Funk and RnB based! Artists like Jacksoul, Remi Shand, K-OS, and Chromeo all really hit the spot! A handful of neat local bands in my area you should also 100% check out are: Lost in Japan, Jaguar Sun, Marshall Veroni, Habit, and Animal Boy!

Check out “The Miser”, the latest single from Excuse Me.!