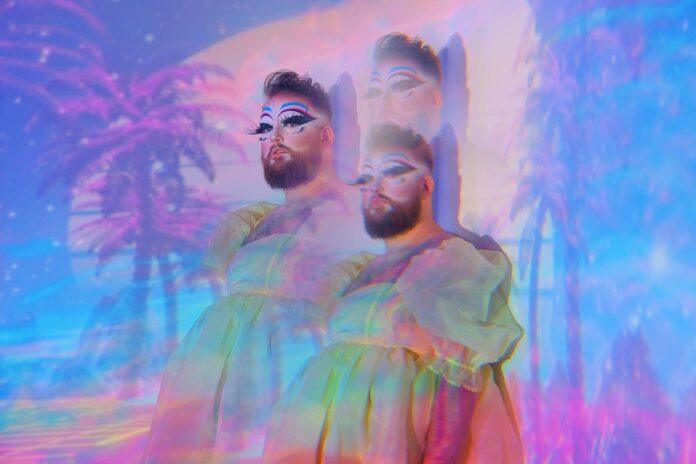 Canadian singer-songwriter and drag queen, Dust Cwaine (a.k.a. David Cutting) creates songs that pull from alt rock sounds of the 90s and early 2000s, and spins them into something unique and utterly human. They’ve recently put out their debut album, Arcana, which explores themes of weight, sexuality, death, Aromanticism, and sacrifice. With the release of the latest single, “Hearts in Atlantis”, we caught up with Dust Cwaine to chat about the song, their musical influences, and the highlight of their career thus far. If you aren’t completely charmed by them after reading this… read it again.

From The Strait: Tell us about the new single, “Hearts in Atlantis”.

Dust Cwaine: Hearts in Atlantis has a very interesting origin (to me at least) while writing I have a process I call research, which is basically to flesh out ideas. At the time I was listening to a lot of Matchbox Twenty as they were a huge inspo on the record and I dug deep to remember when I first fell in love with them and it was summer 00’ when I was 10. I loved reading books and my parents never ever censored what I was allowed to read, so I selected Hearts in Atlantis by Stephen King. I would sit and read and listen to Matchbox Twenty. When I unlocked this memory I was present to the idea that there are so many arcane ideologies that tie to the idea of Atlantis as a place we’ve all been — a sophisticated magical place far from our patriarchal capitalistic colonial reality. From there I brought in the feeling of joy to think that no matter what, no matter where, no matter when, the people I love have always been there. AND THAT IS ENCHANTING.

Then once it was written and demo’d, Josh Eastman and I sent it to producer PLEASEBENiCE and she expanded it for us. It’s one of my fave tracks. Good vibes, good memories, good inspiration.

FTS: How would you describe your sound to anyone who has never heard your music before?

Dust Cwaine: 90’s Alt Rock, recognizable guitar, accessible vocals. I am not a trained singer just like the lead singers from back then, so it leans on passion and storytelling. Queering the genre. I often say it’s a Queer Counting Crows vibe.

Dust Cwaine: Honestly, not much has changed. My faves are my faves. I think nowadays I take hints from queer artists, but I also want to carve out my own unique queer space so I think I enjoy borrowing mostly from Cis Het Straight dudes. I can’t be the only non-binary queer who loves that music and maybe I need to remind folks that this style is fun.

Dust Cwaine: Oh well, I am late with this interview because I was playing my SOLD OUT release show that I produced by myself with the help of many incredible friends. It was the first time in Vancouver that a drag artist/singer songwriter performed with their band playing original music. I kinda purposefully pointed myself away from the traditional drag style of music. Traded the club beats for live drums and acoustic guitar and swapped repetitive catchphrases for metaphors and meaningful bridges. This show is a watershed moment for me and my career and I am deeply proud.

FTS: If you were a superhero, what would your superpower and name be?

Dust Cwaine:  My name is Dust Cwaine and I have the power to hug you! Or like the same powers as Santa hahaha!

Check out “Hearts in Atlantis”, the new single from Dust Cwaine!