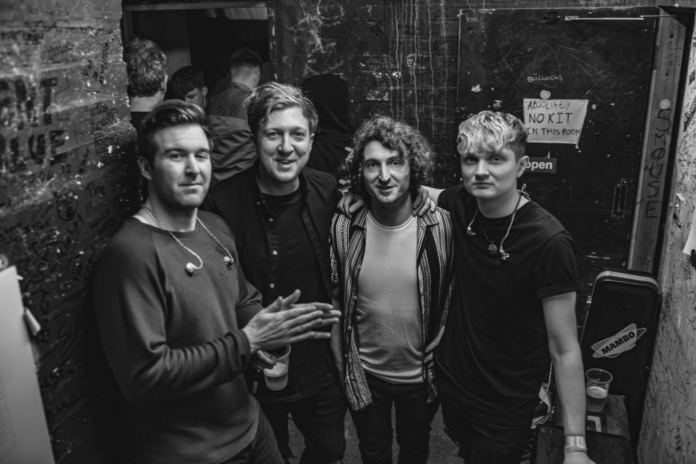 If you want stories, Camens has got ’em – the Stoke-On-Trent, UK band have, in their words, “seen each other go through genuine tragedies and blessings, had great gigs and not so great, and had their fair share of false dawns“. Their songs have pretty great stories as well, including their latest single, “Poltergeist”- a super catchy, haunting alt-rock track. We caught up with the band to chat about the song, under-the-radar bands they love, and their superhero alter-egos.

From The Strait: Tell us about the new single, “Poltergeist”.

Camens: It’s a ghost story, well an attempt at one. I wrote the bones of it genuinely on Halloween night either 2019 or 2020. I was watching horror films and thought that trying to write a pop song that was also a ghost story at heart might be a nice idea for a song. I started with a couple of lines about a car crash and then just developed the idea/story and song from there.

The general narrative is one of a guy driving over to see his girlfriend. He’s maybe texting her back while driving… runs a red light, smashes his car up and dies at the scene. Then in a kind of Sixth Sense/Unfinished Business way, his spirit leaves the crash site and continues on to his girlfriend’s house to love/haunt her. ”I swore that I’d love you ’til the day you die”, so that’s what he does.
Musically, the record owes a lot to bands like the Arctics, Everything Everything, Slow Readers Club etc – that’s what we had on when knocking about in the studio sessions. It’s sonically a long way from the initial idea I brought to the room. The vibe of the record owes a lot to our guitarist Corbo. His lead lines really steered it into the space it’s in.

FTS: How did Camens get started as a band?

Camens: We had a relaunch and a rebrand to Camens in 2017. We were together as the four of us under a different name for a while before then. I’d released some records solo and the band grew around those songs until we reached a point where the sound was certainly more ‘us’ than me. So, it felt right to start again together. clean slate. Initially Corbo and I jammed together after he’d heard some of my stuff online. He knew Josh, and Luke joined after seeing an online ad if I remember right. Weirdly Luke, Josh and Corbo had all known each other before. Luke showed up not knowing they were in the band thou as he’d just spoken to me at that point. small world.

Camens: I can only speak for me really. I’d say your first loves don’t leave you. I grew up on The Beatles and The Kinks, so there’s probably a lot of influences that have endured from listening to great pop/power pop like Lola, Days, Waterloo Sunset etc, certainly melody and pop structure wise. As you get older and start to play and write, I think you become less snobbish about music. Everything’s the same 12 notes, just played on different stuff and produced in different ways. I just love good song writing really.
I think as a band we’ve kinda locked on a group of artists we all like and refer to quite often that have that nice balance of melody and edge,.. poetry and aggression. The Kinks definitely had that, The Libertines/Strokes too. Arctic’s definitely. More recently Wolf Alice, Fontaines etc. We do the Weezer thing quite a lot too.

Camens: It’s only right that we should support a few of our own here… Fellow Stokies, Lissy Taylor, John Dhali and Darla Jade. The lads from All The Young, Psyence and The Underclass too. All working their socks off, having survived being robbed of 2 years gigging. All going for it, all doing their own great thing in a big bad way! Mega to see so much good stuff coming out of our hometown. #SOT

FTS: If each band member was a superhero, what would be their name and superpower?

Camens: Corbs has stories about being caught short on building sites that would make your toes curl…. So maybe his Superpower is being able to defecate unseen… regardless of time, resources or location…. BucketMan?? maybe?

Josh has a tendency to get really drunk after gigs, then fall asleep in the van on the way home. We’ll pull into a Maccies drive through, he’ll stir and somehow order.. then he’ll fall straight back asleep with his hand in the chip carton (this happens regularly), Loves a Maccies …Errm Captain Chicken Legend Meal? Capable of ordering food when both unconscious and heavily intoxicated.

Luke loves dinosaurs… like, the same way a 10 year old loves dinosaurs. I don’t know when we first became aware of it but it’s led to just endless ribbing in the van on long trips out of town for gigs etc. I’ve no idea what super power this gives him but his name in the band group chat is Reptar, as in the fictional toy dinosaur from Rugrats (Deep 90’s Cut). So we’ll go with that for Luke. Super power… whatever Ian Malcom’s is in Jurassic Park or Ross’s is in friends.. Super Palaeontologist!

Annnd Me, I now have to be equally as embarrassing for myself as I’ve been for the lads else that makes me a dick head, which I do my upmost not to be lol.

Corbs regularly calls me Pie Man Powell, owing largely to my unadventurous culinary habits. My skills don’t extend much further than things you can microwave. If I’m honest, adding water to a pot noodle sounds like too much effort in the kitchen for me. My super power is probably my continuing ability to stave off diabetes despite the ‘beigeness’ of my fridge and cupboard contents. Its only through a love of 5 a side and being 6ft plus that I seem to just.. JUST fit in the gigging jeans these days, especially post-lockdown and Xmas!

Check out “Poltergeist”, the latest single from Camens!