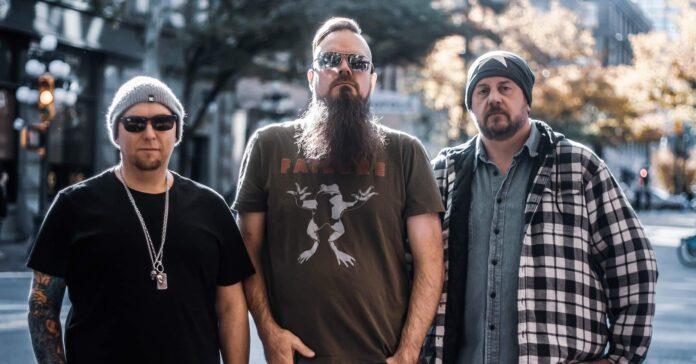 Vancouver alt-rock trio Stickman have just released “Too Late”, their new single from the upcoming EP Happy Accidents. We caught up with Randall, Kim, & Des to chat about the new music, their songwriting process, and their deserted island albums.

From The Strait: Tell us about the new single, “Too Late”.

Randall: Too Late is a song that showcases the harmonies of both Kim and Randall singing in the verses and chorus’.

It gives the listener a sense of a particular era’s sound without being a rip-off. We prefer homage. Heavy and guitar driven,this song, like most of our catalogue, strives to return hard rock music to the mainstream.

Kim: Like most of the songs we write, Too Late came from a guitar riff that I couldn’t quite get out of my head. Once the band gets a hold of it, the real evolution of the song begins to take form. Like most of the lyrics I write, this one is “inspired” by political circumstances that are happening in the world around us.

Des: Our new single Too Late off our upcoming EP  “Happy Accidents”, I think is some of our best work to date. It really embodies everything our sound is. Just straight forward punch in the face rock with an homage to our influences.

Randall: The coolest show we’ve played so far has been the “Return of Rock” bill at the Rickshaw Theatre. It’s what I would call our first professional venue show playing to a large and willing audience. The weirdest show (but also one of our favourites!) was at a place called the “Hot Amp” which is basically an old house converted into a coffee shop with punk/rock shows at night in what is essentially the living room. It was one of our first shows and the lack of pretentiousness and pressure allowed us and the audience to just have fun and that we did!

Kim: “The Return of Rock” at the Rickshaw Theatre was the coolest for sure. Sold out venue, great stage and great bands sharing that stage with us!

Des: The coolest show to date is definitely a show we played at the iconic Rickshaw Theatre in Oct.  Sharing the stage with some of Vancouver’s awesome talent in front of a sold out crowd was amazing and the production was second to none. They truly made us feel like rock stars  that night.  The weirdest show but also one of the proudest to be a part of, was a fundraiser for Cancer at a car dealership. We ended up sharing the stage that day with so many diverse musicians and ended up opening for a marching band. Stickman, a 90’s homage to grunge opening for horns and percussion. Lol

Randall: Most of the Canadian music we are exposed to at the moment is from other bands in similar situations to us. Really great local acts in need of some exposure, working the bars and clubs. Redwoods, Sleep Circle and Collision Course to name just a few.

There are hundreds of really great bands out there doing what we do, and we’d encourage everyone to go see a show, any show! if they have the opportunity.

Kim: Redwoods, Collision Course, Bad Magic and Sleep Circle, to name a few local bands. Bigger bands, I’d say The Zolas, Hotel Mira, Dear Rouge, and The Beaches are some of my faves.

Des: The Canadian bands I’ve been listening to really flow around our local scene. I’m so impressed with our local talent. Sleepcircle, Redwoods and Bad Magic are a few of my favourites but really I discover new bands all the time either sharing the stage with them or catching them at a show.

Randall: Our songwriting process starts with guitar player and singer Kim Whitford. He’s a riff machine, cranking out songs and ideas faster than we can listen to them. Collectively we’ll pick 3 or 4 to work on and then as a collaborative effort we’ll rehearse and tweak them until they are infused with the Stickman essence! We’ve recorded quite a bit of material, some through professional studios and some DIY. There are pros and cons to both. Find our catalogue on Apple Music or Spotify and see which you like best!

Kim: I have my own home studio where I have the opportunity to record all my ideas at my leisure. I find inspiration from many things but especially from using new guitar sounds etc. The ideas I really like will be put into demo form with all the instruments, so I can give that to the guys and really show what it is I’m going for in a particular song. We then bring it to rehearsal and the 3 of us mould it into a Stickman song.

Des: I think our song writing process is very unique to most bands. We all have our strengths in this band and the songwriting strength definitely goes to Kim and Randall. Kim usually presents a song where the basic roots are there. Then we will all put our stamp on it so at the end of the day it is undeniably a Stickman song.

Check out “Too Late”, the latest singly by Stickman!