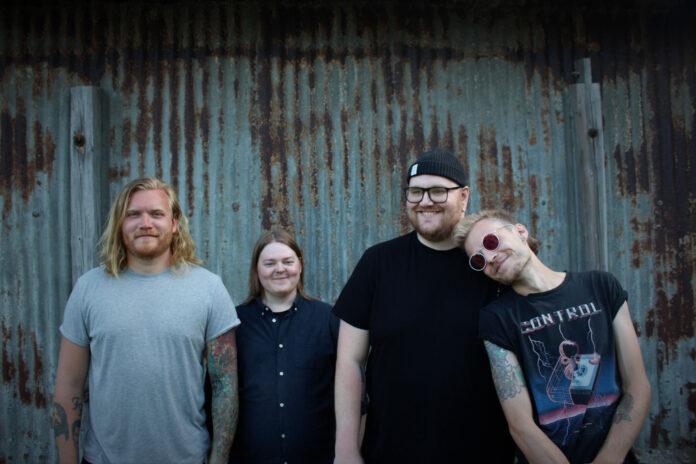 Let’s go Beyond the Strait, all the way to Malmö, Sweden – alt-rock band Astro-Lloyd have just released their new single, “Antlers”, and this one is a catchy, energetic, riff-driven gem. We caught up with the band to chat about the new music, how they got started, and what album they can’t get enough of right now.

From the Strait: Tell us about the new single, “Antlers”.

Astro-Lloyd: The first version (music only) of Antlers was written in late 2018 by our old bassplayer. When he quit the band in 2019 he wanted to keep the music so we just wrote a new song around the lyrics and melodies. This was a first for us as we usually write the music first, then comes up with the lyrics and melodies. But it was a great experience and almost exactly what the song is about. We’ve had a habit in the past of making things a lot harder than it has be, when in reality there’s almost always a simple solution. As we say at the beginning of the song and then the chorus ‘The solution, so simple’.

Inspiration for the song came from the “old” lyrics, just wanting to be better and not make it more difficult than it has to be. We sat in our rehearsal space, trying to feel the song just from the vocals and came up with the main guitar riff from that.

The recording process was pretty simple. We had a friend of the band help us with the drums then we did the rest ourselves as usual. It’s great to do it by ourselves, we can take our time, try everything we want to without stress.

FTS: How did Astro-Lloyd get together?

Astro-Lloyd: I (Andreas, lead vocals and rhythm guitar) used to play drums in a metal band called Sensei. When we decided to move on from Sensei we wanted to try something different for a while and just to see what would happen. Sensei guitarist Martin and I started writing new songs the same evening as Sensei “died” and there Astro-Lloyd were born. After a couple of years of not really getting anything done we found a stable line-up and released our first EP ‘Planet Unknown’ in 2014. We’ve had a couple of bandmembers come and go since then and are now more excited and productive than before, gearing up for the release of our second album.

FTS: If you could play a show with three other bands (with Astro-Lloyd headlining, of course), who would you love to play with?

Astro-Lloyd: Foo Fighters and Biffy Clyro of course. As a third band, fellow Swedes, The Hives. They have been a huge inspiration on a lot of the new material we’ve been writing, love the energy the have both in their music and live shows.

Astro-Lloyd: Usually someone in the band has a song that’s around 60% done, we jam out the rest and then just sings whatever comes to my mind on top of that. A lot of the lyrics start out with real things I’m experiencing at the time and when I get stuck I always find some reference to a similar situation in pop culture and continue writing the lyrics from that point of view. 70% of the lyrics in our songs has something to do with Harry Potter in some way.

Astro-Lloyd: Hard to choose, but right now it has to be ‘Brain Pain’ by Four Year Strong. Love the energy and how heavy it can be but at the same time happy and uplifting.

Check out “Antlers”, the new single from Astro-Lloyd!