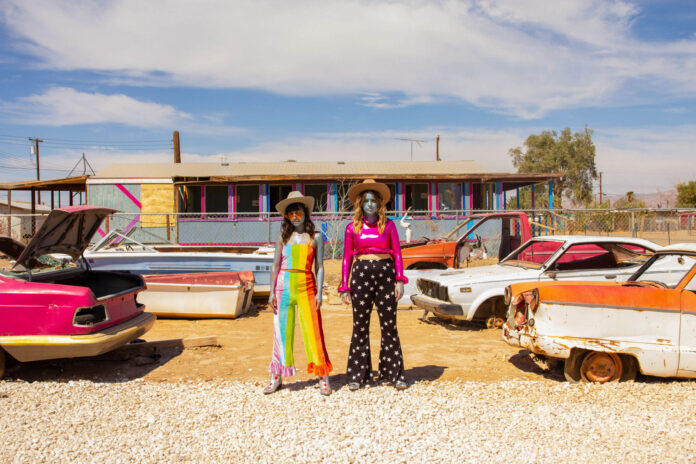 “Boots” is a brand new collaboration between artists Allee and Pom Poms, featuring guitarist Liv Slingerland. The song is an anthem for people everywhere who like to treat themselves – it’s about vanity and self-love. We caught up with Allee and Pom Poms to chat about how the collaboration came about, their songwriting process, and the NFT project that “Boots” is a part of.

From The Strait: Tell us about the new single, “Boots”.

Pom Poms: Hey the world is a trash fire. We all have our vices. My healthiest way to cope is retail therapy. If we’re gonna go down in flames, I might as well look fire.

Allee: Copy what PomPoms said. Gosh darn sometimes we just really need to take care of ourselves and sometimes… that includes a nice pair of boots and a martini.

FTS: This song is a collaboration between you (Allee and Pom Poms) and guitarist Liv Slingerland – how did that come about, and what was it like to work together on the single?

PP: Allee was working on her EP and in the process of building tracks she sent me the one that is now Boots and asked “Is it me or is this a Pom Poms vibe?” I said hell yes. Worked on my verse, bridge and collaborated on the chorus. We know that we needed a searing guitar solo and it was no question that Liv would be the one to deliver.

PP: I have musical ADD. I grew up on Devo, Cyndi Lauper, Barbara Streisand, pretty much all blues ranging from Delta to Chicago, Oingo Boingo and Tom Waits. My influences now are The Monks, Queens of the Stone Age, Eagles of Death Metal, MC5, WITCH, Gillian Welch, Roy Orbison, Nancy Sinatra and Lee Hazelwood. The only difference in my influences now is that I don’t listen to Barbara Streisand anymore even though she’s got one of the best damn voices in the history of vocals…maybe I should revisit some Streisand.

A: I grew up in the OC hardcore scene and listened to bands like Ceremony, Stick To Your Guns, Trash Talk, Underoath, and After The Burial. I started expanding my musical palette in high school and grew up to have a taste for pretty much everything but my heart still lives in the rock world. Some of my favorite artists are St. Vincent, Florence and the Machine, Thrice, and many others but like… recently I’ve been reallyyyy leaning into the bands I grew up on and getting back in touch with that angsty girl with the scene kid bangs.

PP: I don’t know, it changes all the time. I take my vitamins? I read books. I pretend to play guitar and write words over it. If someone sends me a track, I drive around in my car and make funny sounds til it sounds like melodies and words.

A: yeah, every song is different. Sometimes you have to simmer on things and sometimes it comes to you real quick. Usually when I hear an idea in my head… the faster I can get into my studio to work on it the better. But yeah, diet and exercise and trying to stay sane is a good first step in completing any song.

FTS: Tell us about the NFT project that “Boots” is a part of – how did you become involved in that, and where can fans find more information about it?

PP: I’ll let Allee take the lead on this one. If I pretend to explain an NFT I would be laughed off this page.

A: Lol! Jessie, don’t sell yourself short like that. Cmon now! I was part of an incubator program at https://www.wearetherattle.com and met a bunch of folks from their London chapter that had brilliant ideas about the future of Web3 for artists and specifically musical artists. I love the idea that you can continue having a relationship with your NFT buyers and that relationship is not one sided like a typical buyer exchange in the real world. We made 33 NFT’s from Boots and fractionalized into tiny pieces. Each musical component has a visual component that was shot on film by myself and Emma Cole. There are 7 other songs in the NFT collections that were collabs with the artists Dresage, Clayre, Conny Franko, The Astronots and Baz King. Each NFT has a utility assigned to it- upon sell out of the collection there is also a special Merch line and regular monthly meet ups! It’s all on the ETH blockchain and if you ever get sick of us, you can sell it. Party party. Join the fun!

Check out “Boots”, the new single from Allee and Pom Poms!