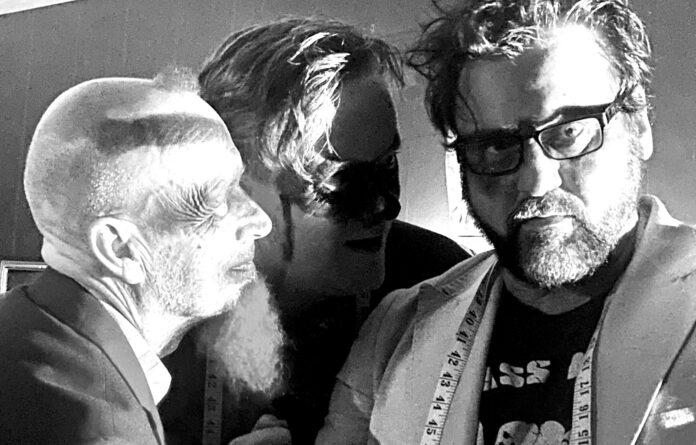 UK trio 9 o’clock Nasty is the kind of band that defies constricting genres and labels, with a penchant for hard and fast songs full of meaning, passion, and a hell of a lot of fun. They’ve just released their latest single, an “anthem for the different” about inclusion and respect for all people. We caught up with 9 o’clock Nasty to chat about “I’m Bent”, the under-the-radar bands they’re listening to, and their superhero alter egos.

From The Strait: Tell us about the new single, “I’m Bent”.

9 o’clock Nasty: Well we have been working hard for about a year trying to reach an ideal for a two minute garage rock song. People that followed us on the journey will have heard the EPs where we allowed ourselves to try out a lot of styles and genres and then from Playboy Driver onwards we’ve been very focused on trying to refine what a song by 9 o’clock Nasty is. I’m Bent is the culmination of that. We want a song that lives by the rule of “Don’t Bore Us Get Us to the Chorus.” We want a song with enough aggression to have an edge, but that is also a pop tune you can sing along with. We want a song that takes influences and ideas we love in music and makes them our own. Above all else we like a song to do what it came to do and not overstay its welcome. I’m Bent brings all that together into a tight little package, it’s got a kick to it, but it’s got a heart too. There is a sad story about acceptance and fear of giving yourself to someone because you know that you are broken, and you are frightened what will happen when they realise just how twisted you really are. But of course we tell the hard stories with a joke, because that is one way of dealing with strong emotions.

When we finished mixing I’m Bent it was a real relief. To misquote Bono, we had found what we were looking for, and that has given us permission to move on again and try new stuff, so you’ll see a far more varied output from us in the next 12 months as we work towards the next thing. Whatever that is. We’ve really dived back into hip-hop and dub reggae in the studio, two huge loves for us, and expect the weird-level to get turned up a notch for a while.

FTS: It’s refreshing for a band to be so focused on inclusion and respect, as evidenced by your “anthem for the different”, as you’ve described this track. Do you find that fans are really responding to that side of your music, and that message connects?

9 o’clock Nasty:  Would we know? The people we interact with, and that is a lot through social media, a definite yes. But social media builds bubbles and we’re in a largely idiot-free space online. For the moment at least. We do occasionally get into trouble. Does someone in Oakland hearing our stuff react the way we hope they will? We don’t know and frankly, if they want to shout the words and attach their own meaning to them, that isn’t something we will ever control. As long as people are clear what our intent is, their response is their own business!

What is true is that we are blessed. Not in a sky-daddy way. In the sense of having the good fortune to be born at a time when the world was rolling in the right direction. I grew up frightened of the police because they would stop me in the street and search me on the way home. That kind of nonsense gradually receded from view. The world got better. Now we see the first signs of the fightback of the idiots, or the people that consider their right to prevent our rights as a life mission. It’s going to get hard. As Golden Plates said so eloquently “As the world returns to the type of fascist theocracy not known since the crusades, we assume due to lack of science education in the western hemisphere, we will continue to play stringed instruments as the ship goes down.”

FTS: What was the coolest (and/or weirdest… weirdest is always good) live show you’ve ever played?

9 o’clock Nasty:  We are about to do our first proper live gig on 19th August in Brighton UK. So that is a hard question to answer. But we have collectively played many, many times. We did have a first gig before we’d even released a song last year in Germany. We only had three songs worked out and we were in quite a strange frame of mind, playing with borrowed instruments in a room full of people that were very enthusiastic to see a new English punk band. Pete and Ted are both bass players (Pete typically plays guitar for 9 o’clock Nasty now) so we had this huge drum kit and two bass guitars, one full-on fuzz, one subsonic. We’re told it sounded very different but on the second song three guys tried to come on stage and it all got very strange. At first it looked like they were going to try and unplug Pete and it would be a huge fight, but then Pete was hugging them and crying and it turned out to be people from a band who we’d played with years before in the Czech Republic who were the brass section for the headlining act. So we gained three incredible trumpet players to play the last song.

FTS: What are some under-the-radar bands or artists you love, and want to share with our readers?

9 o’clock Nasty: There are so many and by listing them we will inevitably upset anyone we forget. Here goes – for the love of your ears check out Golden Plates (we did a collaboration with him that is out now), The Qwarks, our brothers I Am The Unicorn Head, Everything But the Everything, from Australia, Avresa, Otara, The Margaret Hooligans who are the funniest and punkest Who-influenced ukulele and drum combo ever invented, Bones in Butter who are sharp, sublime and genuinely enigmatic (we try but we’re just faking it) and last but not least Molosser who take acoustic grunge to places it can’t get back from. Did you know grunge cannot go backwards or climb stairs?. Then we’d have to add the Femegades, Our Man In the Bronze Age and our favourite weirdo Meskimo, who reaches levels of strange we can only dream of. [Added to this list: The Scavengers, as named in the next answer]

FTS: If each member of 9 ‘clock Nasty was a superhero, what would be their names and superpowers?

9 o’clock Nasty: Pete would be Captain Contacts. He would be this super-hero who could solve any problem because he would know someone who knew someone who would make it all work out. You got a giant prehistoric monster about to ravage your out-of-town bar? No problem, Pete knew someone that was its best friend as an egg and can work it all out. Pete has another super-power which is the ability to remember in perfect detail every lyric to every song he has ever heard. When you write lyrics and find that Pete knows your own words better than you do, it is a little frustrating!

Sydd the great Improviser. Put him in any situation. Any. No, any, and he will find percussion and make a pattern of sounds that you start to groove to. You are probably thinking that is nonsense, but it is freakish. He has a talent for watching bands and then ending up onstage with them adding percussion, or in one case actually taking over on drums (and yes, they were OK with that). In fact I cannot think of a gig in the last two years I’ve been to with him where that didn’t happen, except for the Scavengers. Can I add the Scavengers to the list of must-listen bands for the other question?

Tedd is the Bluff. He is not a musician but he is in a band. He has no idea how a mixing desk works but he is a studio engineer. He is tone deaf and yet he is a singer. There is no situation into which Ted cannot stumble and make up something and make everyone think it was not only a good idea, but that he is an expert on the subject. This caused a serious problem one night, many years ago when at a gig the drummer really wanted to drink and was the designated driver for the van home. Ted offered to drive with absolute sincerity and so the drummer had a great evening. It was at 2am in the car park that it became clear that not only did Ted have no idea how to drive the van, he also had no idea how to even turn it on.

Check out “I’m Bent”, the new single from 9 o’clock Nasty!