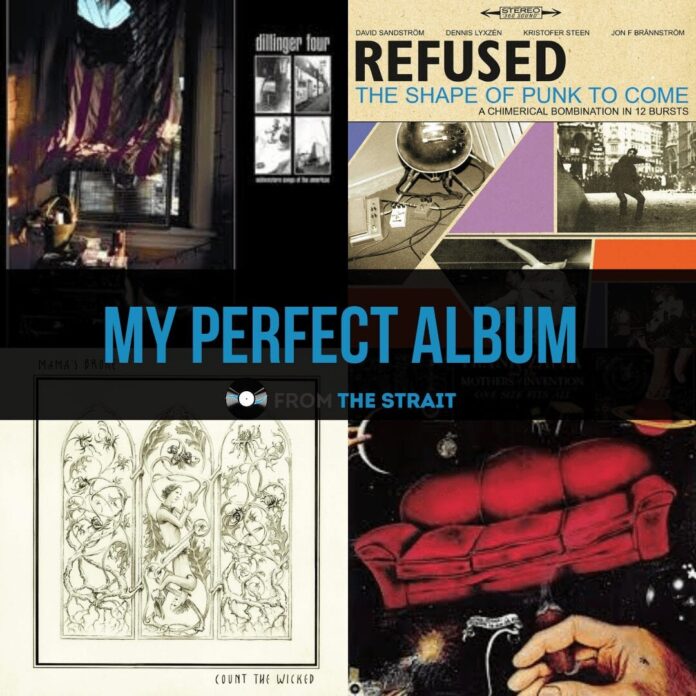 What’s your perfect album? The one that you never tire of, and can listen to over and over. In a new ongoing series, we’re asking musicians to tell us about their perfect album.

Why? If you’ve ever listened to this record you should know the answer. Right from that opening sample, to the band coming in like a full blown assault. This high energy continues non-stop for the next 32 minutes. Once it’s over you’re left wanting more. It’s as catchy as it is raw, and as loose as it is tight. Dillinger Four takes elements from punk rock, 80’s hardcore, pop and mix them together flawlessly, creating a sound that for the past 20+ years has been imitated but never quite duplicated. Add to that the vocal duties shared by 3 main vocalists all with their own distinct sound really put this band into a league of their own. Upon first glance, seeing song titles such as “portrait of the artist as a fucking asshole”, “Supermodels don’t drink Colt 45”, “Mosh for Jesus”, and “Honey, I shit the hot tub” “, most may write them off as another run of the mill punk band. But this band brings with them socio-political lyrics that are both witty and extremely smart. Just yet another thing that separates them from the rest.

Ashlee Standish of Whatzhername (and a solo artist)
Perfect Album: Refused- Shape of Punk to Come

Why: opening with a smooth line from an old film to immediately building tension before erupting into hardcore punk chaos. The album is such a strange interesting mix of ominous atmosphere, crazy riffs and lyrical content. The album ends with violin and a reference to a theme from Stravinkys “right of spring” and then into melodica. When I first heard this album, I was completely captivated and convinced that by the end someone had changed CDs, with the melodica ending. thorough, aggressive, thought provoking. Love it. was thrilled to see them live after they reunited.

I would have to say One Size Fits All by Frank Zappa and the Mothers of Invention. I’m not sure if it’s because it was the first record of his that I ever bought but it’s extremely creative. There are so many textures throughout the album and each player holds their own as world-class musicians. Zappa, in my opinion, is one of the greatest composers and producers of all time and this album shows that off. I’ve heard this album hundreds of times and still always hear new Melodies and subtle textures. It feeds my craving for complex compositions, catchy Melodies, and Blissful & Interactive improvised sections.

So what is a “perfect” record and can it even be achieved? The cynic in me says no. But sometimes you come across a record that you can seemingly relive countless times with just as much enthusiasm and excitement as the first time you listened to it.

A contemporary folk album that I keep going back to is Count the Wicked by Canadian duo Mama’s Broke. Released in June of 2017, this is a monster folk album made up of melodic and driving fiddle playing, ghostly harmonies, storytelling with depth, that kind of banjo and mandolin playin’ that won’t quit (my favourite kind) and traditional foot percussion. Drawing inspiration from Celtic, Balkan, old-time, Quebecois, blues and punk, this album takes you on a diverse journey of time signatures, tempos and styles that transition seamlessly. I keep going back to Count the Wicked because I think Mama’s Broke found that perfect balance between harmony, storytelling, diversity of style and complexity of song arrangement.