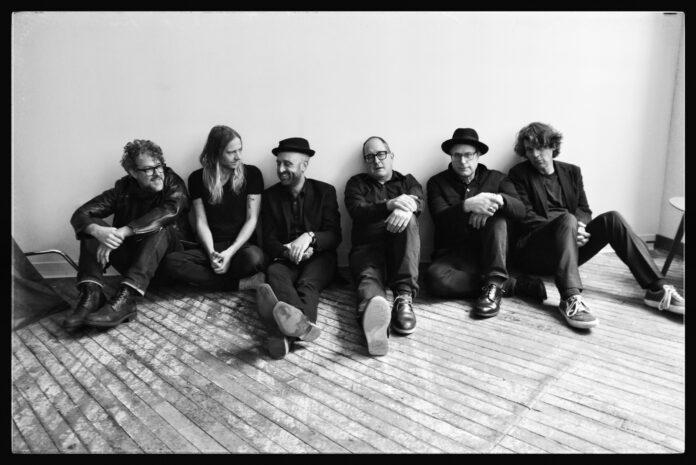 The Hold Steady have announced the release of their ninth studio album, The Price of Progress, arriving everywhere on the band’s Positive Jams label via Thirty Tigers on Friday, March 31, 2023. It will be available digitally as well as on CD, standard black vinyl, translucent green-colored vinyl (band store), metallic gold (indie retail), metallic silver (Vinyl Me, Please), and white (Rough Trade). Pre-orders are available now. The Price of Progress is heralded by today’s premiere of the first song, “Sideways Skull,” available now at all DSPs and streaming services.

“Sideways Skull is a rocking song about rock and rollers,” says frontman Craig Finn. “In this case, they’ve been taken out of the game for a bit of rest, but still keep their dreams alive as they discuss past glories. We loved the big sound of this when Tad Kubler brought it into the band, and the studio performance of it felt especially joyful. We’re happy to put this forth as a first look at The Price of Progress, and the album’s title even comes from this song.”

PRE-ORDER THE PRICE OF PROGRESS

The Price of Progress arrives as The Hold Steady mark the 20th anniversary of their foundation bringing new ideas, sounds, and textures to a still-evolving canon of nine studio album releases that began with 2004’s Almost Killed Me. The album was produced by longtime collaborator Josh Kaufman at The Clubhouse in Rhinebeck, NY, and mixed by D. James Goodwin. The Price of Progress stands as their most sonically expansive record thus far, while also remaining unmistakably The Hold Steady showcasing narrative rock ‘n’ roll tales of ordinary people struggling and surviving in a modern world. The front and back of the album cover feature photographs by renowned Minneapolis-based photographer Alec Soth.

“These are some of the most cinematic songs in The Hold Steady catalog,” says Finn, “and the record was a joy to make. I feel like we went somewhere we haven’t before, which is a very exciting thing for a band that is two decades into our career.”

The Hold Steady will celebrate The Price of Progress with a wide-ranging live schedule, beginning with a performance at Music Hall of Williamsburg on January 28. This will be a special event, with the show taking place exactly 20 years after the band’s first live performance, on the same site (then North Six). Two Dark Birds will be the special opener at Music Hall, harkening back to the January 2003 show where The Hold Steady opened for Two Dark Birds’ Steve Koester at North Six.

The week following, the band will head off for a weekend of shows February 2-4 in the mid-Atlantic, playing classic venues in Baltimore (Ottobar) and Washington D.C. (Black Cat), before finishing in Philadelphia (Brooklyn Bowl).

The remainder of the year features the 2023 edition of The Weekender, the band’s semi-annual multi-night live event for fans in the United Kingdom and Europe, set to take place at London’s Electric Ballroom (March 10-11) and Colours Hoxton (March 12). This will be followed by visits to Portland, New York City (WFUV HighLine Bash), Boston, a two-night stand at Chicago, IL’s The Salt Shed set for June 30 and July 1, joined by special guests The Mountain Goats and Dillinger Four. An additional The Hold Steady show for Chicago at Empty Bottle on July 2 goes on sale this Friday. Tickets for all announced shows are on sale now. For complete details, please visit theholdsteady.net.