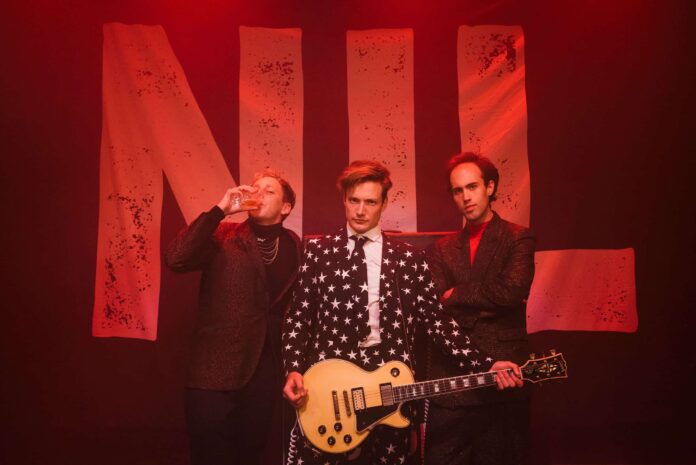 It goes without saying that we’re big fans of The Dirty Nil here at FTS. The site’s first article was about them, so it’s only fitting that we’re featuring the band again around our one-year anniversary.

They’ve recently released a new single, “Idiot Victory”, a cut from their Master Volume sessions that hadn’t made it onto the album. The accompanying video is made in true Nil form – fun as hell, complete with choreographed dancing, and showcasing fans with alternative talents.

We caught up with the band to chat a bit about the video, Luke’s “Tone Tips”, road food, and Desert Island Albums.

From The Strait: Like anyone with good taste, we dig Luke’s “Tone Tips” posts on Instagram – when do Ross or Kyle get their own versions?

The Dirty Nil: Luke’s got the market pretty cornered with that one but that doesn’t mean one day Ross and I might step up to the plate. Stay tuned for possible surprises in the future!

FTS: You guys are road veterans – are you at the point where you know where the best food is in every city?

The Dirty Nil: Honestly I wish I did but you can’t do it all. I do try my best to find the best places to eat. Usually though its whatever is closest to the venue. I find the staff have good recommendations when you’re in a pinch. Shout out to Mickey’s Diner though. We never play Minneapolis/ St. Paul without eating there.

FTS: The covers you’ve released have been pretty fantastic. Are there any you’re dying to do, but can’t pull off with a 3 piece band?

The Dirty Nil: Hmm that’s something we haven’t really thought about before. There are songs we’ve tried to do and given up on for one reason or another but we really enjoy the challenge of breaking things down to make more simple versions of songs we love.

FTS: For this single, “Idiot Victory”, the video is a celebration of all things strange, while the song itself is about “smashing your partner’s cell phone in a desperate bid for attention”. Do you think social media has allowed us to celebrate our strangeness & let our freak flags fly more, or is it just lessening real human connection?

The Dirty Nil: Social media is kind of a tricky thing. It is a good way of keeping up with friends you don’t see often. It can also be a purposeful tool for propaganda or marketing. However, I think it provides a false reality for a lot of people to compare their lives to. While there are numerous pages I find hilarious and enjoyable, certain things cause me to doubt myself or feel like there’s something I’m missing out on. It’s a lot of bullshit at the end of the day. None of it really matters and that’s important to keep in mind.

FTS: It’s a game everyone hates, but we like to play it – desert island albums. If you were stranded on a desert island with only 5 albums, what would they be?

The Dirty Nil: I find it difficult to pick favourites but this is off the top of my head:

Check out the video for “Idiot Victory”, and catch the The Dirty Nil in Toronto on November 28th!