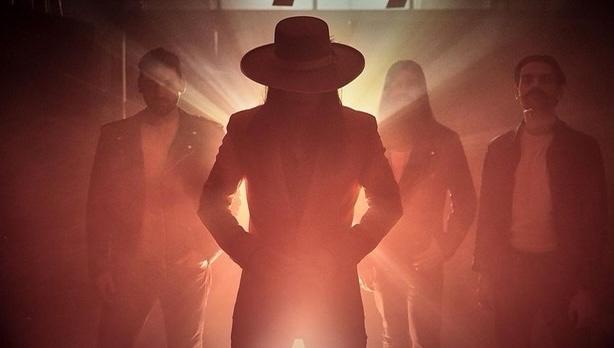 The brain child of musician Clayton Bellamy, The Congregation is a “rock ‘n roll tent revival” with hard rock songs and notable collaborators. With the release of their brand new single, “Soundtrack to the End of the World”, we caught up with Clayton to chat about his songwriting process, his most memorable show, and his favourite Canadian musician.

From the Strait: Tell us about the new single, “Soundtrack to the End of the World”.

Clayton Bellamy: Soundtrack to the end of the world was written by myself Travis Nesbitt from social code and Dan Davidson from Tupelo Honey who is also my coproducer and long-time creative co-conspirator. We wanted something that was going to be an anthem for the times that we are living in. But not dark and brooding something that rages against our current collective experience. Daring to live free in a dangerous world and to love in place of hate.

Clayton Bellamy: For this band I had to completely change my creative writing process and then also adjusted for being locked inside our homes for the last two years not being able to sit face-to-face with people and write songs was a different animal all to itself. All of the songs on the album were written over zoom but everything started as a roof or a drum groove and we would write the music first and then the lyrics a lot of times coming up with a title or an interesting hook first and then building around that.

Clayton Bellamy: My parents were classic rockers and I grew up listening to all of the greats but always gravitated to Bands with big guitar riffs and even bigger front men. Bands like kiss or Van Halen or Alice Cooper who had a stage presence that you couldn’t take your eyes off of the combined great rock songs with an amazing stage performance always pulled me in. To this day I still always gravitated to big riffs and big show performances. Bands like Muse, Ghost, who combine great music with great live show theatrics. I’ve always believed the people here with her eyes as much as with her ears.

FTS: What was your most memorable (or weirdest, if you prefer) show to date?

Clayton Bellamy: Opening up for the Scorpions in Tours France on our first European tour. It was so crazy to be in front of 20,000 screaming music fans who couldn’t understand a word you were saying! We actually brought our tour manager on the stage to translate for us because none of us could speak fluent in French. I started taking French lessons ever since. Can’t wait to go back!

FTS: Who is your all-time favourite Canadian musician (or band)?

Clayton Bellamy: One of my all-time favorite Canadian bands has got to be Big Sugar! Massive riffs and massive grooves. Gordie Johnson is unreal on the electric guitar. He and I have written many songs over the years and recorded together in studio and toured The world and every time I see them it still blows my mind.

FTS: What’s next for The Congregation?

Clayton Bellamy: Currently the band is set to release new music in the new year along with a string of shows across Canada and starting into Europe in the fall. Looking forward to taking the show on the road and blowing peoples minds and getting them to join the congregation!

Check out the latest single from The Congregation, “Soundtrack to the End of the World”!