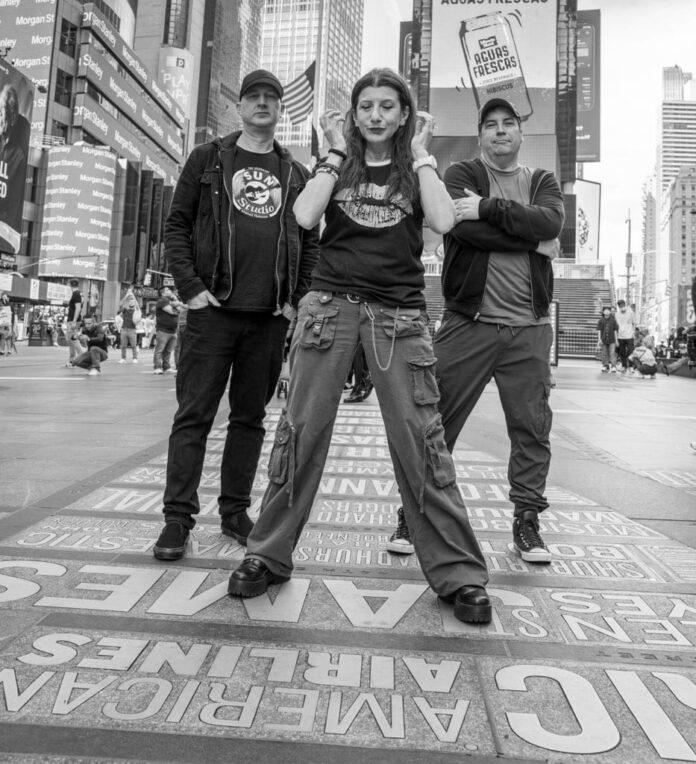 Toronto-based indie/alt-rockers ON recently released their new self-titled album, featuring the single “Underdog”- a track with great energy from the get-go, plus hard-hitting drums, killer riffs, and stellar rock vocals. We caught up with the trio to chat about the song, how they got together, and their biggest musical influences.

From The Strait: Tell us about the new single, “Underdog”.

ON: The new single “Underdog ” lyrically is about getting back into the ring again once more , coming back into a world that doesn’t make any sense . It also has a lyrical reference to the Toronto Maple Leafs whom haven’t one a cup since 1967 . Lucy referenced this in the lyric “1967” not the final destin . In a way , like a sports team, we see the band as an Underdog, but we have to keep forging ahead. ” Another Round” in our chorus. Positive vibes moving forward.

FTS: How did ON get together and form a band?

ON: The band ON formed after we finished touring as Acid Test in the mid 90s. We demoed material and toured parts of Canada, the US and Mexico. We received some decent airplay and played a few festivals as highlights, along with signing with Opcion Sonica a cool punk rock indie label from Mexico City whom had the distinction of being the first international label to release Bleach by Nirvana. We liked that accolade being on a cool label with a catalog like that. So that was a highlight for the band at that time.

We got back together after many years being in other projects and everything just felt right. We demoed material and it turned into what you now hear. We put the album out Sept 16th on our own label indiestructable records. It’s doing really well, selling well and getting some nice airplay in Europe, US and parts of Canada.

Dan, Lucy and I are also great friends and it’s just easy to create and make decisions .

ON: Our influences are all over the map.
Lucy is into Pfunk, early Hip Hop, Patty Smith, to Talking Heads, to Quicksand and Tool. She is quite varied
Dan is into metal and old school hard rock like Zeppelin and also hardcore and punk rock and stoner rock
I’m all over the map. I teach guitar and love classic metal, hardcore, I love funk and r and b guitar, old school blues and dixieland jazz, big band era chordal arrangements. It’s all over the map.

FTS: What Canadian bands or artists are you listening to lately? Are there any under-the-radar acts you think our readers should know about?

ON:  For Canadian bands we like Keelie out of Toronto… they are an amazing hardcore crossover band. We also dig Mev Crimes too . A great punk band.

ON: Great question. Myself, personally, touring with Nine Inch Nails was fantastic, opening a show with Helmet still rad… playing CBGBs a lot to a receptive New York punk rock crowd, a memory I’ll keep and cherish. There are many, mostly the tour memories with bands we admire.

Check out “Underdog”, the new single from ON!