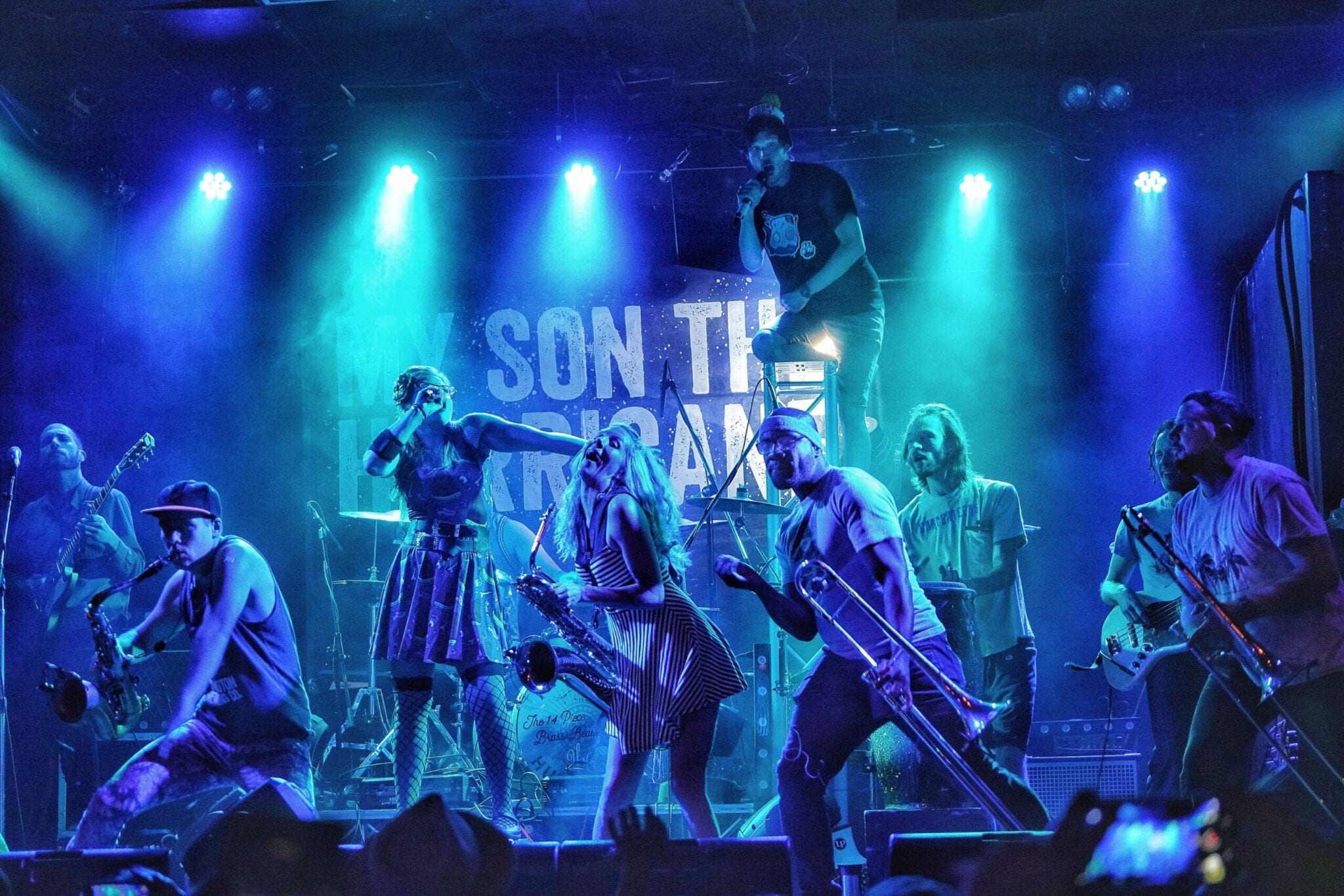 The past year has been a different one for 12-piece brass funk band My Son The Hurricane. Instead of taking over stages and heating up dance floors, they’ve had cancelled tours and postponed festivals. While fans will have to wait to see them live again, there’s still new music to check out in the meantime – we caught up with Danno O’Shea to chat about the new single “Mississippi ’88”, the band dynamic with so many members, and the weirdest show they’ve played.

From The Strait: Tell us about “Mississippi ‘88”.

Danno O’Shea: I love campy spy movies, James Bond, Get Smart, Pink Panther etc. It’s such a fun genre and it seemed like a fun subject idea for a song. The lyrics are about a young female spy (codenamed Mississippi ‘88).  Musically the intro had been thrown around in practice for years, coupled with some new ideas it seemed the perfect base to tell a story of campy espionage! We understand that we aren’t writing “Bridge Over Troubled Water” here, just having fun and we know this one will get the dance floors cooking.

FTS: How would you describe your live show?

Danno O’Shea: We want to be the band that blows everyone away. A band that really makes you forget when you’ve had a bad week and makes you want to dance til you can’t. We want to really convey the joy we’re feeling, that’s not bullshit.  We love each other and what we get to do for the crowd.

FTS: In a band with 12 members, what is the songwriting process like?

Danno O’Shea: Not as convoluted as you might think. Generally one or two people write the tunes then it gets charted for horns by Alex the trombonist who’s a really strong writer and then lyrics get settled by Jacob.  But we have a real wealth of strong writers.

More members are stepping up with great tunes, we have no ego about songwriting…the best song wins. We don’t jam, we hand out sheet music and rehearse then we take it on stage! Sink or swim!

FTS: As a band known for live shows and festival billing, how did you manage through the craziness and setbacks of 2020? Does it change how the band will approach 2021?

Danno O’Shea: It hurt…it hurt a lot.  We lost a large multi country tour. Just cancelling 40 flights was rough. We are taking a more scaled back approach just for this year. We are known for being a large touring band (and with good reason we’ve put on literally hundreds of shows in the last 4 years) but its safe to say that this year will still not be our standard year.

We’ve decided we’ll get out for a few shows in 2021, but….2022 is already very heavily booked for us across Canada and Europe. We hope to tour the USA again but we all gotta take care of ourselves first! That’s where this tune comes in, something to release and show we’re still feeling the love.

FTS: What is the general dynamic in such a large band? Does everyone play a specific role, beyond their instruments?

Danno O’Shea: This is such a great crew of fun people, there’s so much laughter on tour, so many inside jokes, so much backstage fun…it’s lovely. As for specific roles…Some do and some don’t. Basically the booking, agent-work, banking, payroll, stage show, logistics, grant writing, social media etc are all taken care of by two people.  Sometimes the best thing a member can do is just show up and play and have fun. If someone wants more responsibility there’s plenty to share! But some folks don’t have the time or desire to put long hours into the band outside from playing and that’s very understandable. We run this as a business first, and the players are free to have other projects, and do other things, we think that’s really healthy.

FTS: If My Son the Hurricane were curating a festival, what other bands would be put on the bill?

FTS: What’s the most memorable (or weirdest) show you’ve ever played?

Danno O’Shea: So many weird ones.  Obviously Sweden and Haida Gwaii were amazing and very different. But on a giant cross Canada tour we had a day off planned in Smithers, BC and I convinced a fella to let us throw a concert in his lighting store as there wasn’t a venue available. It was so bizarre, and we even stopped the show after a tune because the pizza man came and I had to pay him because we were all so hungry. That was the weirdest! Ha

Check out the latest track from My Son The Hurricane, “Mississippi ’88”!