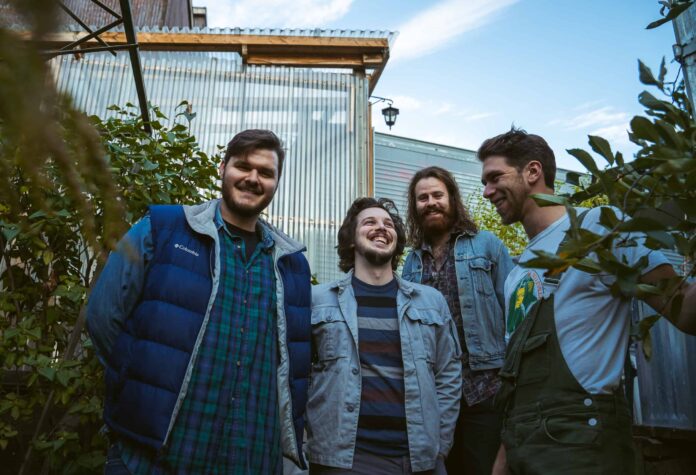 Toronto-based indie folk-rock band, Midnight Vesta are gearing up to release their second album, after taking time to grow a following with their stellar live performances. They’ve just debuted a brand new single, so we caught up with them to chat about how they became a band, the new track, and bucket list shows.

From The Strait: How did Midnight Vesta get started?

Midnight Vesta: Midnight Vesta started with a group of Bishop’s University grads getting together playing the cover songs they loved. It has since evolved into the current line-up, but the mantra remains the same: good friends playing the music we want to play. Now it just happens to be our own music.

From The Strait: Tell us about your new single, “I’ll Have Another”.

Midnight Vesta: I’ll Have Another is about the realization that happens when you get over the hump of a break-up. After the self reflection, the baggage that comes with the “woulda, shoulda, coulda”, there comes a moment when you’re ready to get back in the saddle and be open to the possibility of loving someone again.

FTS: Who you were your musical influences growing up, and how do they differ from your current ones?

Midnight Vesta: I was always raised first and foremost in the singer-songwriter world, with a sprinkling of hard rock and country depending what my parents were listening to at the time. Fast forward to now, I would say I still gravitate towards that blend of music. Bands that are able to genre bend are always of interest to me.

Midnight Vesta: A night that stands out was as we were touring through Fernie, BC when the wildfires were particularly bad in 2017, and the town hadn’t seen rain in something like four weeks. We were lined up to play in my friend’s coffee shop, but with the temperatures being in the 40’s even at night, he decided he’d host the show in his backyard instead. As we were setting up for the show, the skies just opened, and everyone was rejoicing in the rain. It was pretty special to be a part of a collective sigh of relief, albeit only for one moment of one day, but it felt like it gave people permission to enjoy the show. It felt like we played a part in being the touring band that “brought the rain with them”. The rain even stopped for showtime.

In so far as a bucket list venue, within Toronto, our current hometown city, playing The Danforth Music Hall would be pretty great. I know all band members have seen memorable shows there, and it would be cool to be able to provide that kind of experience for others.

Check out their latest single, “I’ll Have Another”!