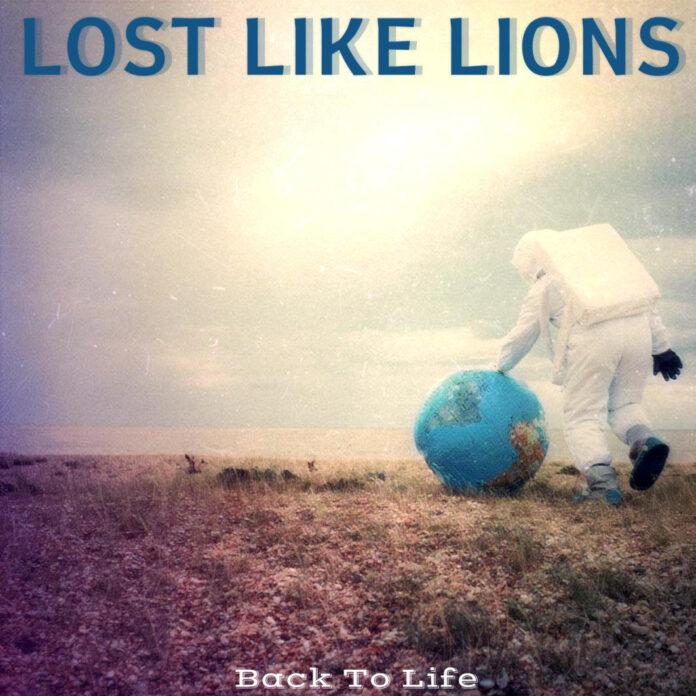 Buffalo-based band Lost Like Lions have a knack for blurring the lines between pop-punk, pop-rock, and alt rock, creating a sound that is undeniably their own. They’ve just released their latest single “Back to Life”, so we caught up with the band to chat about the song, their influences, and under-the-radar bands they’ve been listening to.

From The Strait: Tell us about the new single, ”Back to Life”.

Lost Like Lions: “Back To Life” is the first track off of our upcoming EP “Fear of Letting Go”. Ironically, it was the last track that we ended up writing before we went out to Brooklyn in July 2021 to start demoing out the new ep! I remember it like it was yesterday- I was sitting in my basement with my guitar (hiding out because it was like 95 degrees out that day haha). I just started playing the opening guitar line to “Back To Life” and thought “Hey, that sounds kind of neat” and then almost immediately after that started humming out what would ultimately end up being the verses. I remember texting Jamie (our guitarist) and was like “I just wrote the intro track to the EP”, and followed it with a phone sound recording of me piecing all of the vocals together. So within about a 45 minute span the whole structure of the song (although there isn’t much) was ready to go. I took it to practice the next day or two, and we started playing it as a band. The demoing process in Brooklyn was a blast. One of my best friends lives out there, who also happens to be who we record about 60 percent of our music with. So in between demoing tracks, there was a whole lot of beer drinking and hanging. We then finished the drums at a local studio in our hometown of Buffalo, NY, and then the vocals at another. It seems like every EP we record we seem to either find ways to make things easier the next go around, or learn something about the songs that we want to do or not do the next time around. I swear, another 3 eps in we will finally master our process haha.

FTS: How did Lost Like Lions become a band?

Lost Like Lions: Lost Like Lions was started in 2014 by me (Derrik) as a side project. Jamie (our guitarist) and I were in a previous band together called “This is Fiction”,  it was starting to fall off the rails, and during this period I spent a lot of time writing away from those guys because I knew we were pretty much done. Those tracks ended up becoming the first EP “The Way of The World”. Oddly enough, there were only like two shows played around that time period where I had just pieced together a lineup just to get out there and play. 2015 hit, and I started working a job that required a lot more time out of me so the thought of even playing shows at that point were useless thoughts. The years that followed this I still wrote music of course, but had no intentions of ever playing these songs out live, it was more so just the satisfaction of being able to put pen to paper and put music out still. These songs ended up being half of our “Navigate” EP, and I think it’s fairly easy to figure out which half because the songs are littered in effects, and programming (which I love, but again, only went overboard because I never planned on playing those songs live haha). Those tracks ended up getting shelved for a few years, until I had run into Jamie (guitarist) at a local music festival. We caught up, and talked about how great it would be to play music together again. That summer of 2018 is where the seeds really had gotten planted to start doing this thing again. We dragged our feet a bit to get going, but during this time I wrote the other half of the “Navigate” EP and then we started getting together more frequently. We rounded out our lineup with a bassist, and our drummer to this day Jim and  we got to work. I am so grateful for the random run-in that Jamie and I had together at that festival in Buffalo because that was what had gotten the wheels spinning for us to really go and do this again. Fast forward a couple of years and here we are a few eps in on the verge of releasing our newest one “Fear of Letting Go”

Lost Like Lions: Growing up I was obsessed with Blink 182, and pretty much all of the “Drive Thru Records” roster. Bands like “The Starting Line”, “The Early November”, “New Found Glory”.  But of course I loved 90’s alt rock bands like Third Eye Blind, and Oasis. I would say as I have aged my musical tastes have stayed relatively the same. Third Eye Blind, and Oasis still to this day are still in my top 5 along with bands like Death Cab For Cutie, and Jimmy Eat World. When I find newer bands that I get into, I hold them near and dear to my heart because as you get older it seems like it’s harder to find new music, like I am not the cool young hip kid on top of all of the underground artists about to pop! Some of my favorite artists over the last five years though are Catfish & The Bottlemen, Lewis Del Mar, and Bad Suns. I’ll always shuffle in the older stuff though. We curate a spotify playlist called “mEMOry Lane” and it’s this whole vibe of summers at Warped Tour. Hours upon hours of throwbacks, with newer bands sprinkled in. It’s always fun going into that mindset of being young, careless, and enjoying simpler times.

FTS: If you could play a show with three other bands (Lost Like Lions headlining, of course), who would you love to play with?

Lost Like Lions: My dream lineup, if I had to pick only 3 would be Blink 182 (with Tom Delonge of course), because that band is the only reason I ever wanted to pick up an instrument in the first place! Third Eye Blind, and Death Cab For Cutie. Although, if we could get Sugarcult to play one more show, I may have to bump Third Eye Blind from that lineup, only because I have seen 3EB live at least 15 times haha.

Lost Like Lions: One band I think everyone needs to go and check out is a band from Austin, TX called “Hovvdy”. They aren’t a “small” band by any means, but they are great, and deserve to be heard by everyone. If I need to get you hooked by listening to only one song, then check out the song “Pretend” on a late night car ride.

Check out “Back to Life”, the latest single from Lost Like Lions!