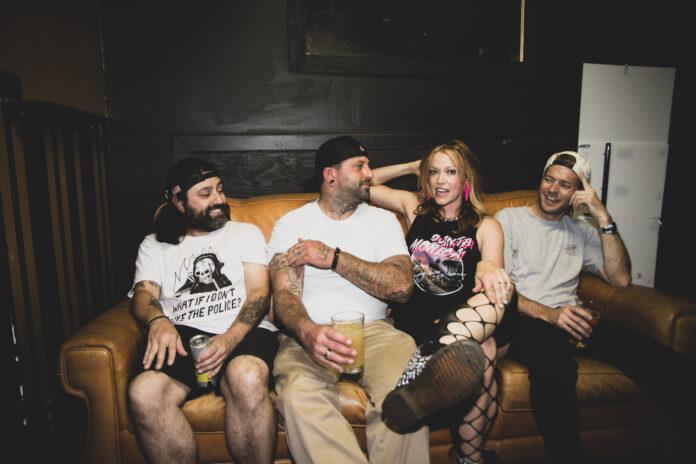 San Francisco-based band Local Bylaws bring the energy right from the get-go in their latest single, “Benton”. A short and sweet alt-punk punch to the face with catchy vocals, driving riffs, and a lot of grit, it’s sure to grab your attention and hold on. We caught up with Local Bylaws band members Ginger, Matt, Alex, and Jeremy for an entertaining chat about the song, their musical influences, and their superhero alter egos.

From The Strait: Tell us about the new single, “Benton”.

Ginger: Well, this was early 2021, frustration was abundant. The guys (who are union workers) were getting sick of these “wormy” people in their union who were pretending to be in solidarity but really only looking out for themselves. As for me, I had just moved to a town that felt like it was inhabited by a bunch of judgmental Karens. I was angry at first, but then I thought, “nah…I can be free from this garbage if I just decide to. Let them be miserable if they want, let them judge, but I’m gonna live how I want.” With our grievances combined, this song was born.

FTS: What are some San Francisco bands or artists that should be on our readers’ radar?

Matt: Quarter Conscious and Umb.
Alex: Bull Goose Randall and Nina Durango.
Matt: Haha thanks.
Ginger: Those are both of Matt’s other bands.
Jeremy: I did sound for Grumpster and was pretty impressed.
Ginger: We play with so many good bands! I like TREASVRE and Build Them to Break.

Alex: Green Day was my first concert in 2nd grade and I’ve been stuck on 90s punk ever since (with a Bay Area gangster rap phase somewhere in there).

Ginger: This is why we get along. Mine were early No Doubt and Alanis, followed by every pop-punk-emo-hardcore band, and east coast / southern rap from the 2000s. I’m all about the feelings! And the lyricism! Currently I love the folk-punk, the alt-country, the weird indie, and of course all the new bands that sound like the old bands.

Ginger: He is PUP’s biggest fan.

Matt: Davis and Shit Show in the Park.

Ginger: The theme is that both of those were kind of guerilla shows in weird places, with 20-year-olds everywhere going nuts.

Jeremy: If we aren’t talking Bylaws shows: I played in a storage container in a junkyard in Slovakia and had to fight off a feral cat for my dinner. Show went the fuck off too, those bohemians know how to party!

FTS: If each member of Local Bylaws was a superhero, what would be their name and superpower?

Matt: Robin Hood wasn’t a superhero but he should have been. Take from the rich and give to the poor.

Jeremy: I’d be Germy Sperminator. With one swift kick to the crotch I can make any dipshit waste of life infertile.

Ginger: I think I would be ADHDemon. I can hyperfocus for hours! I can listen to an audiobook while cooking dinner, getting dressed, writing a song, and talking on the phone! But I can’t find my keys! Alex is Lead Vampire.

Alex: Lead Vampire, diverting drunk middle-aged ladies back to my castle and out of the rest of the band’s hair. There’s a story there.

Ginger: And a song to go with it.

Check out “Benton”, the new single from Local Bylaws!