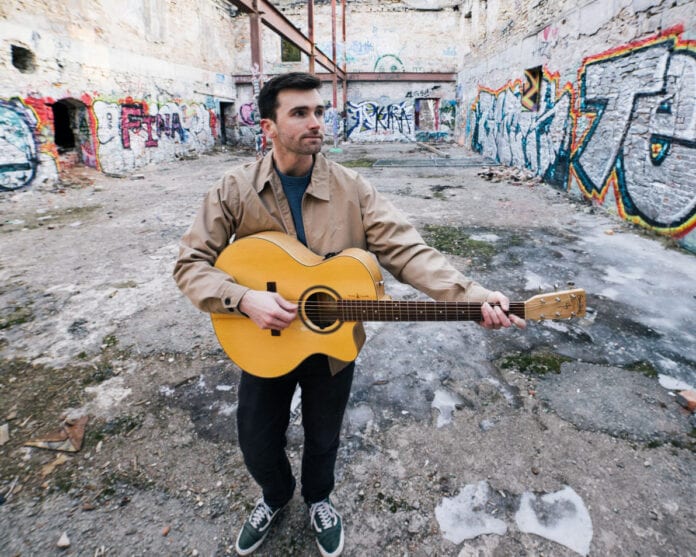 Award-winning singer songwriter John Muirhead has been steadily making a name for himself with his brand of indie folk. He’s just released his latest track, “American Cash”, and we’re stoked to premiere the video for you here on FTS. We also caught up with John to chat about the new music, his musical influences, and what his superhero name would be.

From The Strait: Tell us about your new single, “American Cash”.

John Muirhead: American Cash is a song I wrote at the beginning of 2020, after taking three different trips to the US over a very short period of time. It was a strange time to be in America as an outsider, and I had this growing mental list of observations that made me feel far from home. Things like the billboards being taller than Canadian ones, the content of the radio stations, the American money that I tried to get rid of before heading home. It’s always been a strange and mysterious headspace to be travelling the US, considering how similar it is to Canada, and yet how different it can feel at times.

At its core, it’s a song about adventure, alienation, and subtle reminders that you’re not where you’re supposed to be. Also, this is the first song I’ve released in a while without a single acoustic guitar on it, which is exciting to me. Rock on.

FTS: You’ve won an impressive amount of awards for your music over the years, is there one that stands out or means the most to you?

John Muirhead: Thank you! I’m grateful to have been noticed by some great organizations over the years.

I’d have to say that my nomination for Young Performer of the Year from the Canadian Folk Music Awards meant the most. It came very early on in my career, at a time where I had a lot of self-doubt about what I was doing and who I was trying to be as an artist. It gave me a big boost in confidence and helped me to keep moving forward towards my goals.

FTS: Who were your musical influences growing up, and how they differ from your influences now?

John Muirhead: I grew up around a lot of Canadian artists – Neil Young, Blue Rodeo, Barenaked Ladies. These artists are forever influences on my music, whether I like it or not. After I picked up a guitar as a teen, I tried my best to be John Frusciante from the Red Hot Chili Peppers.

Nowadays, I still like those artists, but my taste is pretty diverse. I listen to a lot of folk, Americana, indie rock, punk, bluegrass, pop, and r&b. I try to get inspired by as much of it as I can!

This song specifically was inspired by a big mix of artists, namely The Weakerthans, The Menzingers, The Tragically Hip, Pinegrove.

FTS: How would you describe your music to anyone who hasn’t heard it yet?

John Muirhead: The perfect soundtrack for a cross country road trip across Canada.

FTS: If you were a superhero, what would your name and superpower be?

John Muirhead: It would probably be “Sleep Man”. I take pride in the fact that I can fall asleep pretty much anywhere. Trains, planes, busses, airport floors, you name it. I’m not sure how I could help people with that, but at least I could wear a cool costume while I sleep.

Check out my song “I Can Sleep Anywhere” for more on that. Haha.