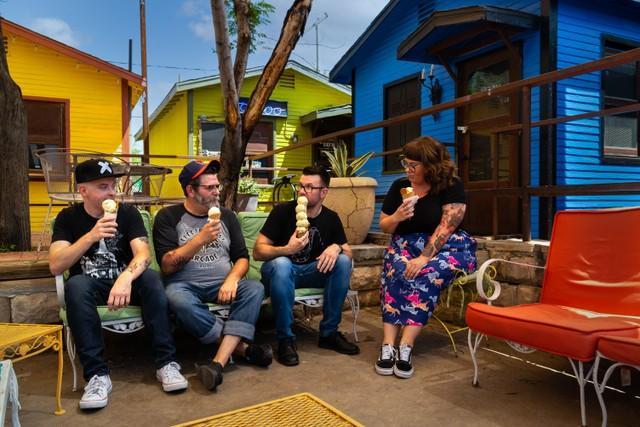 Phoenix, Arizona’s Joan of Arkansas is a band that defies genre and labels. Their brand of sludge pop-meets-alt rock-meets-post-punk is uniquely theirs, and the latest single is no exception. They’ve just released the video for “Erase Me”, a catchy and fuzz-filled song from their recent EP, ¡Distortionista!. We caught up with the band to chat about the song, how they got together, and the under-the-radar bands they’re diggin’ these days.

From The Strait: Tell us about the new single, “Erase Me”.

Joan of Arkansas: Erase Me is a perfect lil capsule of some of our favorite things to do/talk about in our songs. Musically It’s manic, it’s intentionally distorted and buzzy and fuzzy as hell, the drummer sounds like he’s on 18 cups of coffee but isn’t coordinated enough to play a convincing punk beat. Gang vocals and a 50-dollar fuzz pedal that is dialed to melting. Lyrically, It’s about that sneaky suspicion that you will never outgrow your awkward phase, that you are the ugly duckling that never turned into a swan. Just an Ugly Ass Duck. We are older, we remember when self-doubt was cool.

FTS: How did Joan of Arkansas get together?

Joan of Arkansas: J.O.A. formed in mid-2020 out of sheer boredom during covid hell. E.P. hadn’t been in a band in damn near 10 years, and Kayla had never been in one. We formed through Craigslist and Tinder, respectively. (we have a couple in the band, we will let you figure out who.)

Joan of Arkansas: That’s a tough one, I figure all the bands we love would be outside smoking or trying to fuck the bartender.

Give us an empty room with just a really enthusiastic Billy Joel dancing the samba as we play. That would be cool.

FTS: What are some under-the-radar bands you think our readers should know about?

9. Rocket from the Crypt

FTS: What makes Joan of Arkansas stand out among other bands and artists?

Joan of Arkansas: We hope our enthusiasm is readable. We hope our love of noisy hooks is noticeable. We just want to the best track on a mixtape that your cool cousin made for you.

Check out the video for “Erase Me”, the new single from Joan of Arkansas!