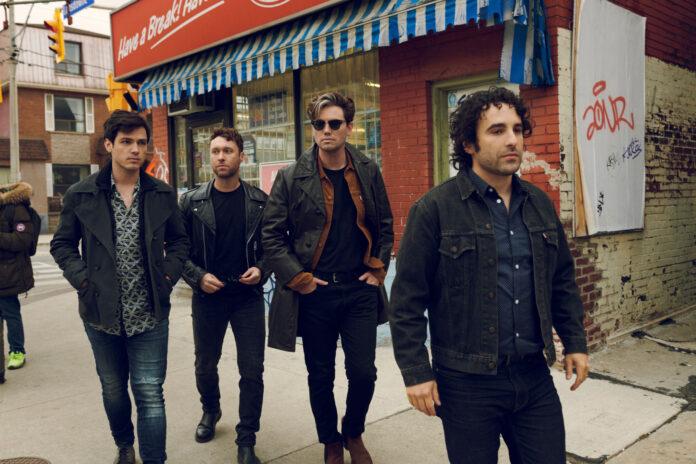 Later this summer, Toronto-based quartet Jane’s Party will release their new album, Live Again. Their new single of the same name came out earlier this month, alongside a Bob Dylan “Subterranean Homesick Blues”-style lyric video. We caught up with Jane’s Party once again, chatting with band member Devon Richardson about the new music, the evolution of their sound, and his advice for musicians just starting out.

From The Strait: Tell us about the new single, “Live Again”.

Devon Richardson: “Live Again” is our triumphant return to releasing original music. Since 2020’s “Change Her Mind” we’ve only released a pair of cover songs, so it feels really great to put out something of our own again. The song was very personal to me when I wrote it, dealing with life after my mother passed, but I think it’s message of hope and optimism can resonate with a wider audience as people start to live their lives again post-lockdown. Sonically speaking, we’re also really proud of the way this one came out. Kids will say it sounds like we’re channeling The Killers, but we were reaching a little further back to 70’s era Bruce Springsteen and even Jeff Lynne with our production choices on this one. Big shout outs to Mike and Carlin from the great band Zeus for the production help and to Jay Dufour/Joao Carvalho for the mixing/mastering 1-2 PUNCH!

FTS: Our last interview with you was way back in 2019 – how has the band/music evolved or changed since then?

Devon Richardson: We’ve really stepped up our online presence. When the pandemic hit we knew we couldn’t stay stagnant so we came up with all these fun projects that used all our diverse skills to keep us sharp. A 45 minute cottage retreat acoustic show called The Marshmallow Revue was a blast making. We got to write commercials, come up with skits, and compose music for various transition scenes. We then took those skills and what we learned and put out our YouTube series, Wild in the Woods. We perform a cover song and one of our originals with various guests and do it all off battery powered amps and gear IN THE WOODS! It’s quite fun…you never know what people walking by are gonna say.

FTS: What are some under-the-radar artists you’ve been listening to lately?

Devon Richardson: This band called Star Parks, from Austin, are pretty rad. Their song “Oh Boredom (Schmaltz City, USA)” is great. Junior Mesa has a song called “Losing My Grip” which got a lot of spins while we were in LA recently. And not too long ago I stumbled upon this band who’s been together over 40 years called NRBQ and I’ve been OBSESSED with their songs “Magnet” and “Ridin’ In My Car”. Don’t know if they’re under-the-radar, but I hadn’t heard of ’em until the Almighty Algorithm recommended them to me.

FTS: Since you’re known for your live shows, I can only imagine how hard these past two years have been. How does it feel to be able to get back on stages once again?

Devon Richardson: We’ve only had a couple so far…this summer we’ve got a bunch more, but when we play together it just reminds you how much fun it is to play music. The business side and now mainly the social media side of things can really drain you sometimes and take up a lot of the conversation…so getting to just go on stage and sing and live in the moment for a little while is the best feeling out there. It’s great to be able to do it again. Really looking forward to playing “Live Again” live, can’t wait to see how the audience reacts.
FTS: If you could give advice to Canadian musicians just starting out, what would it be?

Devon Richardson: Songs are what is most important. There are enough 90% aesthetic / 10% talent acts out there. Really work on your songwriting/beat-making. And it always helps to find someone like minded to bounce your ideas off of. Collaboration is a beautiful thing.

Check out “Live Again”, the new single from Jane’s Party!