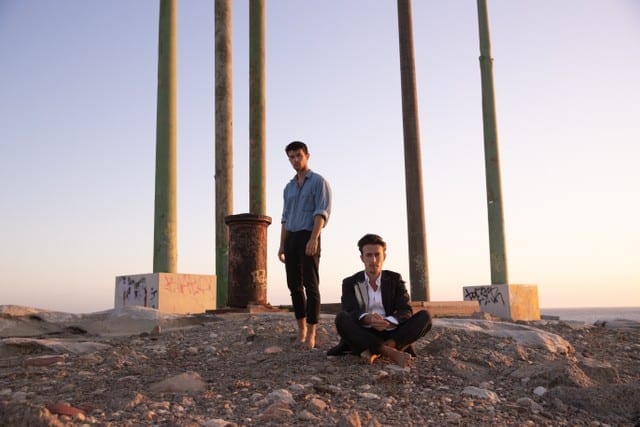 Brothers Mickaël and Raphaël Fortin are the multi-instrumental duo that make up Hey Major. Their debut album boasts big names as far as production and mixing, creating a can’t-miss LP. They recently released their latest single “The Station”, so we caught up with the band to learn more about it.

From The Strait: In your own words, what is your new single “The Station” about?

Hey Major: The Station tells the story of a man waiting at the train station with his girlfriend. She’s leaving and deep inside, he knows they’ll never see each other again. This song was written after a break up, describing a certain love nostalgia when you need to let go of something that meant something real.

FTS: Who came up with the concept for the video?

HM: We were doing a photoshoot for the album’s cover art by the ocean while touring in Australia. The photographer listened to the song and was really inspired. A week after that we shot the video back in Sydney.

FTS: Tell us what we can expect from your upcoming album.

HM: It’s gonna be an album that travels a lot. We’ve worked with different producers, in different places, it took us 3 years to choose and work on the songs. We didn’t want to rush anything but at a certain moment we needed to let the songs breathe and grow. Lots of Bowie influences especially for the vocals, Elton John and Queen too for the pianos since we’re a rock band, driven by keys. It’s an album full of love and stories, we are really proud of it.

FTS: If you could play alongside any band (any genre), who would it be and why?

HM: We’re really into Elton John. We like Arcade Fire too, a lot ! Their energy, their theatrical and eclectic energy live. It would be so amazing to share the stage with them. I think the music would fit too!