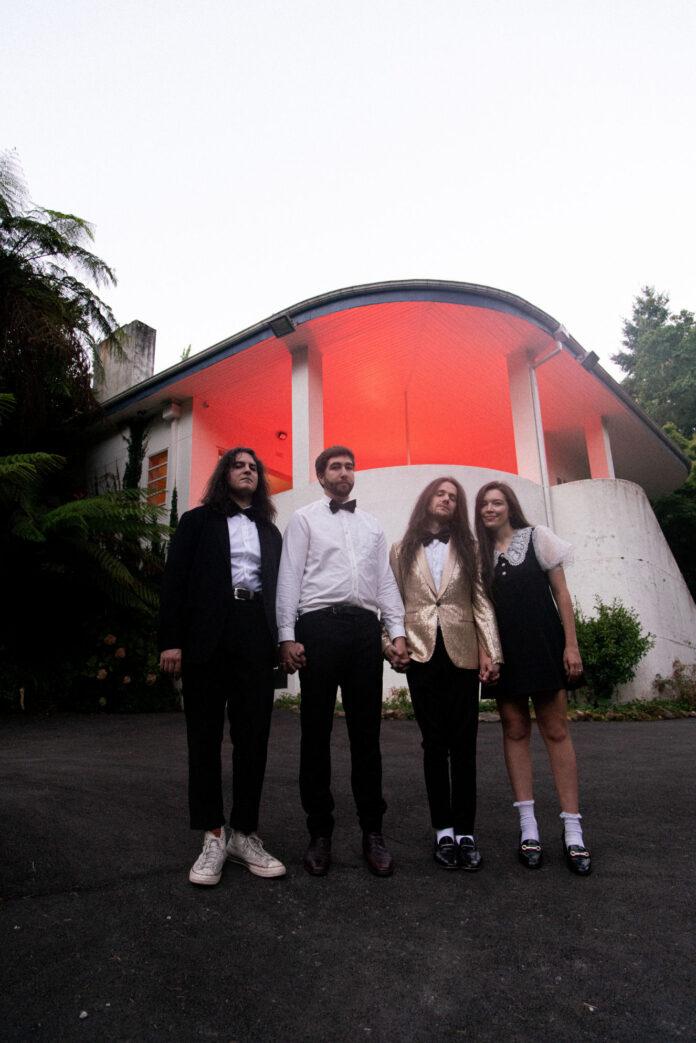 Every once in awhile, a band’s debut single makes you stand up, take notice, and think “damn, they’re gonna be huge”. Such is the case for Australian band GLOB, and their debut single “R U Happy Now?”. Accompanied by an insanely entertaining Kubrick-style video, this song has the catchiness and polish of a band that’s already had a long and lucrative career. Accurately described as “sounding like “Fleetwood Mac’s ‘Dreams’ with an adrenaline shot to the heart” a la Uma Thurman in Pulp Fiction”, “R U Happy Now?” shows that this is a band to watch. We caught up with GLOB to chat about the single and video, how they battle writer’s block, and what’s up next for them.

From The Strait: Tell us about the new single, “R U Happy Now?”.

GLOB: R U Happy Now? is our debut release produced by Michael Badger (King Gizzard & The Lizard Wizard, Amyl and the Sniffers). The song was written back in 2020 but due to the lockdowns here in Melbourne, we were unable to properly record it until early 2021. The song came about following a significant shift in our lives and was lyrically inspired by the novel and film adaption of ‘The Shining’. The writing process for this one was unusually swift for us and was more or less fully realized before we brought it to our producer Michael Badger who worked his magic on it, transforming it into what you hear today!

FTS: What was the creative process for the new music video?

GLOB: As the song lyrically takes a lot of inspiration from ‘The Shining’ it only made sense that the music video should too. We found a beautiful 1930s art deco property located in the Dandenong Ranges of Victoria which we felt had a similar vibe to The Overlook Hotel from the film and set up there for the day, it was a very compact operation with all of the members of the band pitching in on things like lighting and direction with Lily’s (keys) brother Andre Sawenko behind the camera reigning us all in.

GLOB: I find listening to familiar albums and artists to be a reliable source of inspiration if I’m experiencing a lull in productivity, watching films and reading are two other pastimes that I find are very effective at refilling the well also! I write down a lot of snippets of lyrics and song ideas in my phone as well which I tend to forget about so going back over them can sometimes be the spark of something new.

GLOB: Recently my partner Lily (keys) and I went on a rather poorly planned hike and ended up walking the last 5km of the trail in complete darkness, luckily though we had enough phone reception to still be able to play music so we ended up listening to ‘Relaxin’ with the Miles Davis Quintet’ on repeat to comfort us the rest of the way back to the car, it was an album neither of us had properly listened to previously but after that experience, it became an instant favorite of ours.

FTS: What’s next for the band?

GLOB:  We are currently planning music videos for our next couple of singles and working on finishing our debut LP which we hope to release early in the new year.

Check out “R U Happy Now?”, the new single from GLOB!