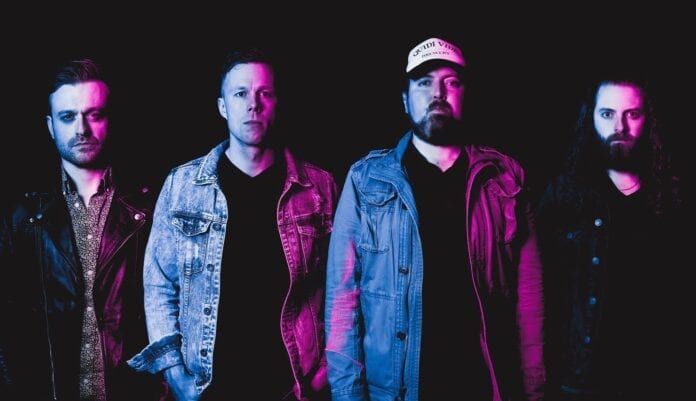 Newfoundland band Fairgale are known for their 3-part harmonies, pop-rock sensibilities, and strong songwriting. They’ve recently released a new video for their single “What Doesn’t Kill Us (Makes Us Stronger)”, so we caught up with Andrew Rodgers (guitar / lead vocals) to chat about their music, the band’s influences, and the most memorable show they’ve had to date.

From The Strait: Tell us about your new single, “What Doesn’t Kill Us (Makes Us Stronger)” – what was the inspiration for it?

Fairgale: The song is a story of someone who is struggling with addiction, in this case, alcohol and is losing someone important to them because of it. The character in the story reflects on themselves and realizes that they have taken their partner for granted but can only see that now that they’re slipping away. The main character doesn’t want to face the world alone and is willing to do whatever it takes to save the relationship before it’s too late.

The story a culmination of things I’ve witnessed, watched and read about. It’s not necessarily about anyone in particular but it’s a narrative that seemingly affects many people. Sometimes the characters come out on top. Sometimes they don’t.

Fairgale: The Modernization of retro rock

FTS: Who are your biggest musical influences, do you all have similar tastes?

Fairgale: We have a very broad spectrum of musical influences but some of our common ones are Kings of Leon, The Killers, Foo Fighters, The Black Keys, U2, Dawes, and The Novaks to name a few.

FTS: What is your most memorable (or even weirdest) show to date?

Fairgale: The four of us have also been in a cover band together so it’s hard to even know where to start haha. We had a gig once where the bar owner stole beer out of our fridge in the apartment we were staying in and sold it back to us in the bar. We knew because they didn’t sell that brand of beer. Hilarious.

Perhaps the wildest thing we’ve been apart of is playing onstage with Trooper & Bryan Adams. How it all came together is quite amazing. We had been a part of a Battle of the Bands style competition where the winners would win the chance to open for the Canadian Rock Icons Trooper. At the time, we hadn’t released any of our own music. As an attempt to conjure up more votes, we shot a video of us playing a ballad version of “We’re Here For a Good Time” at the St. John’s International Airport late one night and posted it the next day. Trooper saw the video and immediately contacted us and said that they wanted us to play our version of the song with them to open their set whether we won or not. We were blown away. The story even gained some serious momentum with all local news outlets in the province. It seemed like everyone was talking about us. We won the competition so we were also given the chance to play our music in front of 5,000 people.

Flash forward a few years. Trooper were booked to play another show in the area, so we wrote them and said we were coming to the show and that we hoped we’d see them at some point. They offered to hang out with us the day of show and this time they wanted us to close out the show with our version of their song. To say we were looking forward to it might be the world’s greatest understatement.

Unfortunately, most of the flights into to city that day were delayed. Ra, the singer, didn’t land until about 45 minutes after the show was supposed to start so we didn’t get the chance to hang out as initially planned. A crowd of about 5,000 people eagerly waited for the band to kick off the show.

Meanwhile, just a short distance away, Bryan Adams was in town and had finished up a show at Mile Once Center and decided he wanted to come jam with Trooper. We heard that he opened for Trooper when he was a teenager as part of the band Sweeney Todd and wanted to take advantage of their paths crossing once again. The word reached us that he was standing side stage. Sure enough, when we looked, there he was. This was only possible because Ra’s flight was so delayed.

At this point, we had no idea what was going on. The show appeared to be going on as you’d expect but behind the scenes, there was quite a bit of chaos happening. We weren’t sure if we were still going to perform the tune. We were standing side stage without actually knowing if it would happen while Bryan Adams and Trooper were doing the most epic cover of “Jumping Jack Flash”. When the song ended Ra looks around and says, “Are the Fairgale guys here” into the mic which echoed shot out through the PA and echoed off the old buildings in downtown St. John’s. I had to push my way to the stage and then squeeze past Bryan Adams and all the other people that were there. My brain was exploding.

There we were, center stage staring into the eyes of 5,000 people who just watched Bryan Adams and Trooper jamming on The Rolling Stones. No big deal. Stephen sat down at the keys and we were in way too deep to turn back now. I started singing, “A very good friend of mine…” and the crowd basically did the rest. It was one of those wipe your forehead and exhale moments.

Just when we thought it was over, Ra told us to stay and we all sang the original version of “We’re Here For a Good Time”. This included Bryan Adams. In the middle of the song, he walked towards me and shook my hand and said something like “Hey, nice to meet you”. The show ended and we did a final bow. What had seemed like a dream was now a story I could tell.

Check out the video for Fairgale‘s latest single, “What Doesn’t Kill Us (Makes Us Stronger)”!