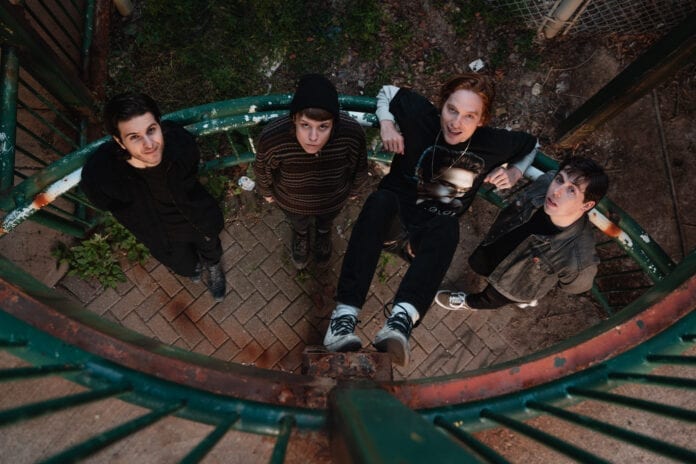 Hailing from Toronto, The Effens have a unique post-grunge sound, and are a band to watch. With the recent release of their new single “Pavement Age”, we caught up with Austin, Paul, Hannah, and Fabian to chat about their influences, how the band got their start, and the new track.

From The Strait: Tell us about your new single, “Pavement Age”.

The Effens: It’s got a bit of everything that we are aiming for with our music. Loud/quiet dynamics, overdriven guitar, gnarly sonic textures and a focus on melody.

FTS: Who were your biggest influences growing up, and how do they differ from your current ones?

Austin: Music hit me the hardest at age 12 when I was listening to Nirvana and the Pixies. As an adult I listen to Mitski and the boss, Bruce Springsteen.

Fabian: Growing up I listened to Nirvana but now I listen to Pixies

Hanna: I grew up listening to Paramore, Fall Out Boy, Billy Talent, and Green Day now I listen to Ringo Deathstarr, Cherry Glazerr, Hum, Unwound and The Wytches.

Now that I’m older and the internet is a thing, I’m able to find lesser known bands or bands from the 90s as opposed to growing up in the 2000s when I listened to a lot of what was on MTV and through word of mouth from friends and family

Paul: Before trying to develop a ‘personal identity’ in the way I make music, I was absolutely enthralled at first by the likes of Pink Floyd, and then the Smashing Pumpkins.

I think what’s changed from when I was growing up is probably just that my biggest influences now sound totally different than the music we’re making – and I think that’s rather fun. It helps me bring in some strange and interesting ideas to our creative process.

FTS: How did the band get started?

The Effens: The band was formed by Austin as a teenager and had different lineups come and go until this final formation of Hanna, Fabian & Paul solidified in 2018 when we got our act together and started releasing music.

Fabian: I want Peter Hook in the audience because 7 years ago he wrote me a letter saying “don’t give up music” and I want to show him I haven’t
The actual quote was “keep trying, it’s the only way”
That was 5 bands ago.

Hannah: I mean honestly a lot of bands that are involved in the D.I.Y scene in general seem like lovely folks such as Palehound, Melkbelly and Spirit of the Beehive. I’d be jazzed just to hangout and chat with them. As for big names Hum, Sonic Youth, and Bikini Kill are all bands that have had a big influence on me so having any of them around would probably invoke a panic attack but I’d be stoked, it’d be a happy panic attack.

Austin: I’d like to have the audience filled the bands we have made friends with in the Toronto scene because I’ve never seen people go as wild as them. Burner, The OBGM’s, Bad Waitress, Lush Buffalo, Joncro, Lourie and too many more!

Paul: I’d like to play a show where the entire crowd is solely composed of musicians from various symphony orchestras from the 1920s

FTS: What’s next for The Effens?

The Effens: We have tons of music built up. Like many bands, we had to keep delaying our plans for 2020 so we are very glad to finally be able to share what we have been working on.

Check out the latest track from The Effens, “Pavement Age”!