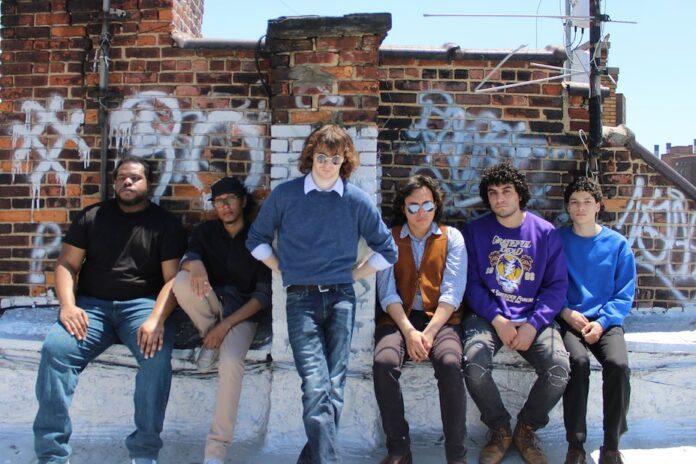 If you’d like a more pop-tinged version of The Strokes, or “angry Beach Boys”, or even the Beatles with a little more edge… The Breaks Inc. are your new favourite band. The NYC-based group just released their latest single, “Pinocchio” (and it’s a massive earworm), so we had a chat with band member Danny Marra about the music, his biggest influences, and his fan encounter with Albert Hammond Jr.

From the Strait: Tell us about the new single, “Pinocchio”.

Danny Marra: Beginning next year, we’re going to try putting out one new single every month for as long as we can. Pinocchio is the first single we’ll be putting out on January 1st, 2022.

Our guitarist (D. Rivas) brought the chords, melody, and lyrics for the first two verses, I came in with the chorus, the bridge, the last couple of verses and the outro. A true collaboration in the Lennon/McCartney sense. We make a good songwriting team and I’m so glad we have him.

We did most of the recording at our friend’s home studio (J. Luca), but I was very excited to record the most beautiful Yamaha grand piano at Richie Cannata’s Cove City Sound Studios in Glen Cove, NY. I was told Ray Charles played it. Is there anything cooler than that? Sorry I’m geeking out…

It’s got a lot of cool elements I think. I’m a sucker for things like tubular bells and strings. Or the hokey harmonized guitar lines. I even picked up my old saxophone to record the horn parts. There’s all these little things that jump out to grab your attention and give you something to listen to. Try to find two seconds in this song where something isn’t happening – I dare you!

FTS: How would you describe your sound to someone who has never heard it before?

Danny Marra: Oh geez…I always get asked what type of music I make and I genuinely never know how to respond. I suppose I should try figuring it out one of these days.

Someone we know once said we’re like the angry Beach Boys? I don’t know how accurate that is. I feel like I’m a genetic test-tube mixture of Jeff Lynne and John Lennon who was orphaned at a young age and then raised by my older brother Liam.
I wish that there was a term that applied to whatever the Beatles did. Beatlesque? I guess that’s it. It should be its own genre though. Beatle Rock. Yeah that’s it.

I love intricate harmonies. I love interesting chord progressions. I absolutely can’t stand a generic chord progression with an uninspired melody and meaningless words. What’s the point of writing that song? And worse yet, is when bands put out an entire album that sounds like one really long song. Every time I sit down at my piano to write, I try to think of a chord I haven’t used in a long time. I want each of my songs to be different enough from each other that they can be easily differentiated by someone who is listening. I think you’d be surprised to hear the next single we release in February. You’ll seriously wonder if it’s the same band.

Danny Marra: It’s pretty obvious by now how much I love the Beatles. Growing up my father had so much of the memorabilia hanging up in our basement.

In high school I listened to Electric Light Orchestra almost everyday. And I would sing along to all the different harmonies each time I went through an album. Same thing with all the Billy Joel albums. The Good Rats are an obscure favorite.
I’d also get really into the older standard stuff like Sinatra and Dean Martin, and especially Louis Prima. I was kind of all over the place.

In my more recent years I’ve discovered my favorite songwriter of all time, Elliott Smith. He’s the catalyst for the type of stuff I’ll be releasing in the next two years when I finally get around to recording my concept album. But I also love bands like Dr. Dog, Coldplay, and Ben Kweller. My favorite band currently is the Lemon Twigs. I’ve seen them play 9 times so far.
But we’re also 6 different guys with a lot of different stuff going on in our heads. Like our guitarist is a Harry Nilsson super fan. I think that’s how Pinocchio started out, in that Nilsson vein, and then we took it in a bit of a heavier direction.

FTS: What’s your favourite thing about being in a band? Least favourite?

Danny Marra: My favorite thing about being in a band is that they are my closest friends. They understand the importance of music; playing, writing, recording. These are things I need to do to survive, and I’m sure it’s the same with them. Outsiders or nonmusical people don’t get it. We simply understand each other. Although our bass player (G. Simmons) is most likely a robot sent from the future, so if he reads this he might have something snarky to say but I know his heart is in it too.

My least favorite part? I don’t know. Having life get in the way of what I hope to be our success. I’m certain that what we’re doing has appeal. There is a definite audience out there that would appreciate the quality of our hard work. They just don’t know it exists yet. I’d like to spend my life making music. It sucks when you can’t do that because you’ve got bills to pay, or we have to cancel band practice this week because of so and so’s thing. If there are any rich benefactors out there who want to fund our lives while we do the music making I’m taking applications. How many times do you need to go to “space,” Bezos?
It’s been two years and we’ve only been able to release two EPs. That’s not from a lack of material – we have so many great songs. It’s a lack of time. That’s why I quit my job a few months ago. I’m hoping it pays off.

FTS: What’s the best concert you’ve ever been to?

Danny Marra: I have so many great memories of concerts. I always bring an album in case there’s a chance of getting it signed (it works about 95% of the time).

Seeing Albert Hammond Jr. play Brooklyn Steel in March of 2018 might be one of my favorites. I got there 4 hours early to line up so that I could be near the stage. Yours to Keep was my favorite album at the time, and he played a lot of it. He must have seen me singing all the lyrics to all the songs, even the obscure ones, because at the end of the show he walked right up to me and signed my album on stage. I was freaking out because I couldn’t get the shrink wrap off the LP (I clearly wasn’t prepared for this to happen), which made him laugh and he said “Here gimme I’ll do it.” It’ll hang on my wall forever.

Check out “Pinnochio”, the latest single from The Breaks Inc.!