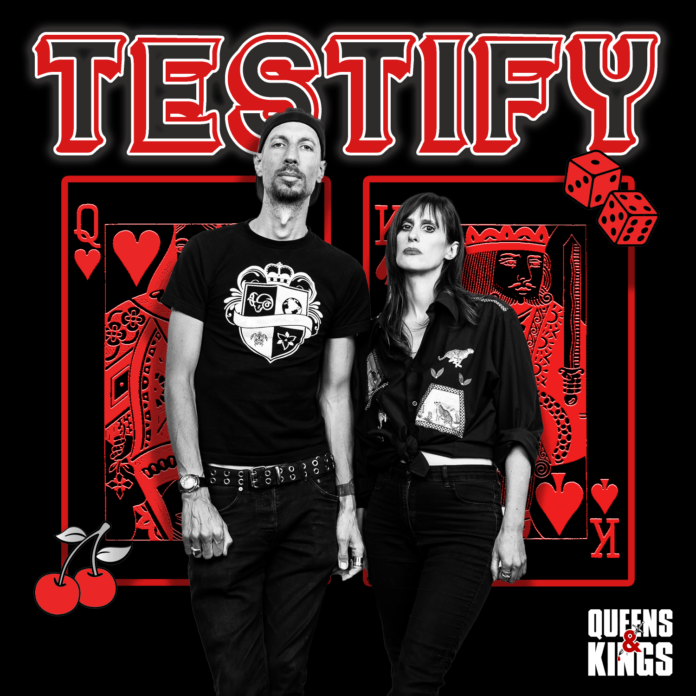 It’s always a good day when new music from Queens & Kings hits our inbox, and their latest single is a catchy rocker with driving guitar riffs and a beat you’ll wanna move to. The Toronto-based duo (Alissa Klug and Brendan Albert) just released the music video for “Testify”, so we caught up with them to chat about what made them want to become musicians, the Canadian bands they’ve been listening to lately, and their deserted island albums.

From The Strait: Tell us about the single, “Testify”.

BRENDAN: TESTIFY is the brand new single and we are excited to have people hear it! It’s a high energy, positive message banger about not holding back from what you want to do in your life.  If you have a dream, scream it to the world! Give it everything you have and TESTIFY!

ALISSA: Yeah!  In a way, those lyrics are like our anthem for this band. Just work to give yourself the life you feel you were meant for, and do it now and do it without fear–because why else are we here?  There are no time limits or restrictions…we have one life and we should try to carve out the one we want.

BRENDAN: I think having an opera singer and piano player mom had something to do with it. Also having two older sisters with cool record collections, I would just put on all these records and just absorb it all… Listening to 70’s rock probably was the catalyst for me to get a drum kit and guitar.  But under it all it was just always there an undeniable pull to make music yes!

ALISSA: Kind of similar for me, I just was obsessed with it since the time I was so small, I could fit in the dome-shaped lid of my parent’s record player and roll around the room.  I remember trying to write songs in my room after watching kids shows and then I have a vague recollection of trying out for a play and singing a sort of somber version of “There’s No Business Like Show Business” to a piano and being surprised that I sounded alright! haha.  I grew up taping songs off the radio and trading home made mix tapes with my friends…I was always searching for new music and hearing sounds in the environment around me.  Just an undeniable pull, as you say!

ALISSA: Yes, those are definitely some of our favorite local artists we have been fortunate enough to share some bills with. Also 0stella who is based in Edmonton and so many others…too many to name them all, haha!

BRENDAN: I used to get brutal nervousness, like almost throwing up nervous many years ago… Now and with this project almost never. This band is therapy and I’ve also been through so much in my life I have a different perspective on it all. To combat nervousness say to yourself, it’s not like I will die up here, what’s the worst then can happen? and just say FUCK IT in your mind, and do it for YOU and no one else. Everytime you play you might get 2% less nervous… it adds up!!

ALISSA: I don’t get too nervous for this project, generally speaking because like Brendan said, we do this one largely as a big release for ourselves and playing it just feels like pure power!  But I do still often get nervous when playing my looping project Alissa Vox Raw because it’s just me solo looping a bunch of instruments and stacks of vocal harmonies on one channel and so much can go wrong if the sound conditions aren’t quite right…if some feedback or distortion or any sort of external noise gets into your loop…there are just elements of it that are beyond my control to some extent. Especially when I do fully a cappella sets…There is just very little room for error, haha!  When I’m playing Queens & Kings or non-loop, full band projects in general, I generally only get nervous if I’m dealing with overcoming an injury or ailment…that always adds some stress.

BRENDAN: Hard one, I generally don’t think in albums I think in bands but I would say The Beatles (hippie era), Metallica, Led Zeppelin, Stone Temple Pilots, Weezer blue album…

ALISSA: Ahhh, don’t ever ask a libra this question! Haha!  I think if I only had 5 albums on that island, I’d be really happy that I’m a good swimmer….Hmm, I’ll just name 5 that have stuck with me over the years, but my answer could change tomorrow, or in five minutes, haha!  Let’s say….PJ Harvey…maybe Rid of Me, Yeah Yeah Yeahs – Fever To Tell, The Kills – Midnight Boom….I don’t know, maybe throw in some Savages, Kills Birds, Spinnerette…but then I’d also probably sometimes need some other vibes like Alice Coltrane or some Joy Division and I’d need some Cuban timba and so much more…I think I’d just have to make my own giant playlist to bring along, haha! Or at least we would need some instruments, power and a recording studio on this island!

Check out the video for “Testify”, the latest single from Queens & Kings!