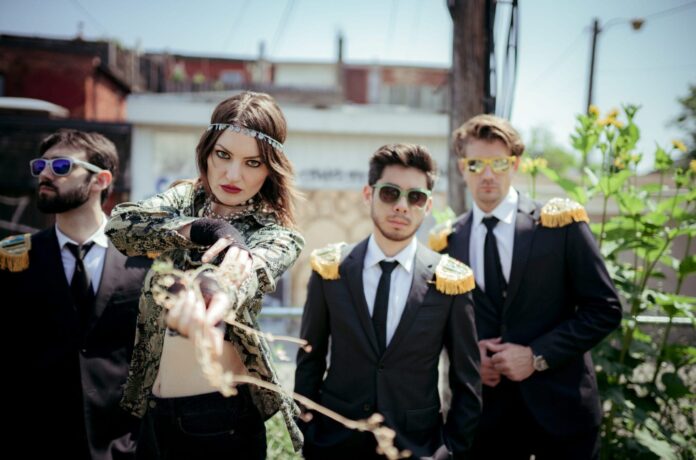 Toronto-based garage rock/synth pop quartet Neon Bloom just released their brand new single, “Lighten Up” from their forthcoming EP. We caught up with the band to ask a few questions about their influences, their new video, and their dream tourmates.

From The Strait: The video for “Lighten Up” features footage from your Taiwan tour. What made you choose this as the backdrop for the single?

Neon Bloom (Fred): We wanted to highlight our live performance / stage energy, as well as share the fun, adventure, and camaraderie we experience while on tour. The vibe of the song is a fast-paced whirlwind of awesomeness, with some rough edges – just like the experience of touring as an indie rock band!

NB: (Jen): Neon Bloom summed up in four words, as an Acrostic poem:

FTS: If the band could tour with anyone, who would it be and why?

NB (Jen): I feel like Blondie would be a natural choice for us, as they were the pioneers of that punk/new wave/disco sound, of which we have certainly been influenced. Also, I have personally always looked up to Debbie Harry as a sort of archetypal female front woman, ever since I was a little girl. I love her talent and style, and the chances she has taken, effectively cutting a creative path for other women in rock music.

FTS: With different personalities in the band there are sure to be an array of influences. How does each band member add their own style to the Neon Bloom sound?

NB (Jen): Each member brings a lot in terms of influences and style. Speaking for myself: Over the years I have found ways to fuse my love of poetry, rock and roll, blues, post-punk, and jazz to create a motley combination of musical writing, lyricism and showmanship held together by an aesthetic sensibility driven by a love of art and fashion. My fascination with literature started at a young age and developed into a keen study of English and creative writing – I even quote some William Blake in the background of Full Fathom 🙂 That’s part of the chemistry you hear when you listen to Neon Bloom.

NB (Simon): One of my favorite things about Neon Bloom is being able to combine elements of electronic and rock music together. I’ve always been heavily influenced by both of these genres and it’s a ton of fun to be able to kick on a distorted guitar sound for one song, and then switch to playing keyboard for the next one. It keeps it really fresh and has helped me grow and develop as a musician. Always having both those possibilities in front of me helps keep me open minded about what sounds and textures each song needs.

Check out the video for their new single “Lighten Up”!