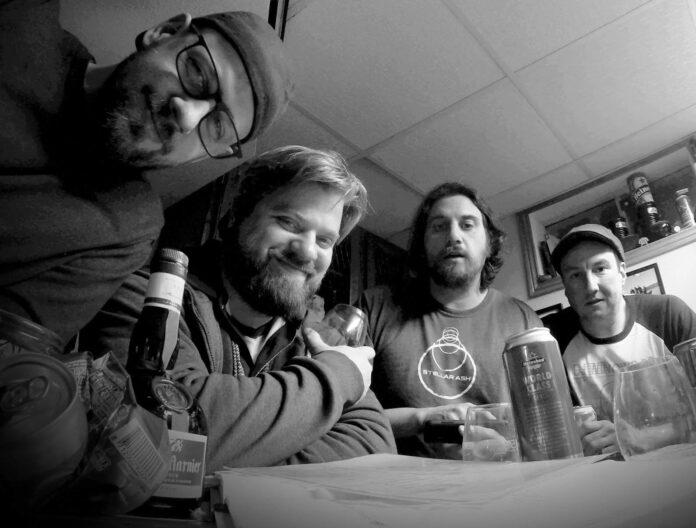 Niagara four-piece Mad Mungus have just released their first single, “Whoa Love”, featuring the talented Laurel Minnes on backing vocals. We caught up with the band (Warren, Dave, Neil & Pat, respectively), to chat about the song, how they got started, what local bands they dig, and how they came up with the name “Mad Mungus”.

From the Strait: Tell us about the new single, “Whoa Love”.

Mad Mungus: Although it doesn’t come across as your conventional love song – it’s still a love song. It’s about conflict and conflict resolution within a long-term relationship. A simple explanation turned grandiose. And the response that ensues.  A story of controlling love on a backdrop of a cold snowy winter night.  It sways between descending and ascending rhythms while there is a struggle between the narrator and the muse.  The mood is apologetic and somehow, impatient.

FTS: How did Mad Mungus become a band?

Mad Mungus: Mad Mungus is a story of two musical forces (Neil/Warren from the band Rondam and Dave/Pat from the band Impervious Three), colliding through serendipity.  Neil had a bunch of songs that he played on his acoustic and sang.  He wanted a band but could only find a drummer (Warren).  After a long time rehearsing as a duo, Neil and Warren found a bass player (Dave).  They recorded some demos as a trio and then invited the guy recording the demos (Pat) to join in on electric guitar.  Now Mad Mungus is a 4-piece extra value meal.

FTS: What are some Niagara bands & artists that you guys are listening to lately?

Mad Mungus: Stellar Ash, Whatzername, The Weather Wild, Treetops, The Cocktails, The Minimum Wage, and the amazing Laurel Minnes who helped with vocals on this tune.

Pat – Growing up I loved popular 90’s stuff like Pearl Jam, Neil Young, Blind Melon, Ben Harper etc…  Now I find myself on YouTube free-falling down rabbit holes listening to everything that’s out there for hours at a time.

Neil – I still love the music I listened to growing up.  They were and continue to be my biggest musical influences:  The pixies, Violent Femmes, Portis Head, The Band, all Grunge and 90’s rock and hip hop.

FTS: Tell us about the name “Mad Mungus”.

Mad Mungus: The name Mad Mungus comes from when I was a child my father who was an English professor, would call himself the evil Mad Mungus Mcgillicuddy and chase me and my friends around the house.  I found out later on in life that my friends were actually terrified of him as he was 6′ 2″ 230lbs. And because of chasing them around the house calling himself a monster.

……He wasn’t actually a monster though.

FTS: If each band member were a superhero, what would their superpower be?

Warren:  Knows the answer to any question that doesn’t matter

Check out the lyric video for “Whoa Love”, the debut single by Mad Mungus!