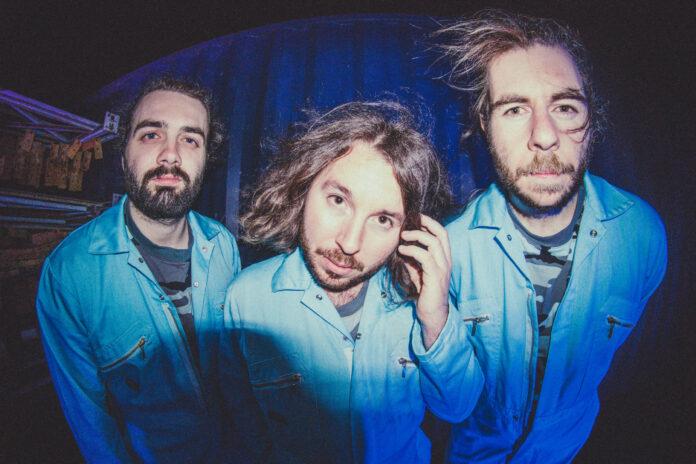 Hailing from Newcastle, Ten Eighty Trees have been steadily making a name for themselves as a band to watch. Their alt rock anthems have resulted in sold out shows and stacked festivals across the UK, as well as critical acclaim. They’ve just released their latest single, “The Incubator” – a riff-forward track with catchy vocals and an impeccable mix of melodic and heavy. We caught up with Ten Eighty Trees to chat about the new song, how the band got started, and some under-the-radar bands they’re currently diggin’.

From The Strait: Tell us about the new single, “The Incubator”.

Ten Eighty Trees: We wrote it post-lockdown as an anthem for the socially anxious. The song portrays a protagonist unprepared & overwhelmed by the outside world, yearning for the metaphorical safe space of The Incubator to feel a sense of peace. That’s the way I felt, being told to go back in society to work and interact the way we previously had after so long indoors and isolated. I’m not saying I preferred lockdown, but the period of adjustment afterwards was hard for a lot of people I know and The Incubator was born out of the exhaustion felt from that.

FTS: What are some under-the-radar UK bands you’re currently listening to?

Ten Eighty Trees: The UK rock scene is so vibrant right now and could literally fill this whole article with amazing acts but a small selection would be headcage, Lull, Motherland, Cat Ryan, Dunes, Wild Spelk, Giant Walker who are currently making waves in the North East of England. And Slash Fiction, The Golden Age of TV, PerfectParachutePicture, Jetski, Work in TV, Nightschool, Juke and Rothschild are all worth checking out from Yorkshire.

FTS: How did the band get their start, and how did the name Ten Eighty Trees come about?

Ten Eighty Trees: We all knew each other from studying music at The Sage in Gateshead and the band came out of just getting in a room together and jamming through some tunes I’d been working on. The chemistry was there from the start and everything TenEightyClicked super quickly.

The band name comes from an experience I had at Glastonbury festival. A friend of mine had indulged in some mind altering substances and when I asked if he was alright he replied “I’m seeing Isosceles Grass and Ten Eighty Trees”. I made a note of the latter straight away as I knew it was a band name just waiting to happen. Isosceles Grass is still up for grabs if anyone wants it.

Ten Eighty Trees: I would imagine Enter Shikari are a great band to tour with. They’re masters of what they do and have done it all in a really DIY way from the outside looking in. I feel we could learn a lot from them on tour and they just slap so hard live as well so seeing them every night would be insane.

FTS: All artists (save for the exceptionally lucky ones) experience writer’s block from time to time. How do you battle through a block when song writing?

Ten Eighty Trees: Having a just do it mentality really works for me. Even if I’m not feeling super inspired or wanting to play music I’ll try and sit down and come up with a new idea each day. I think it’s true that ‘if you don’t use it, you lose it’ so flexing that song writing muscle regularly really helps to ward off any possible down turns in creativity.

Check out “The Incubator”, the new single from Ten Eighty Trees!