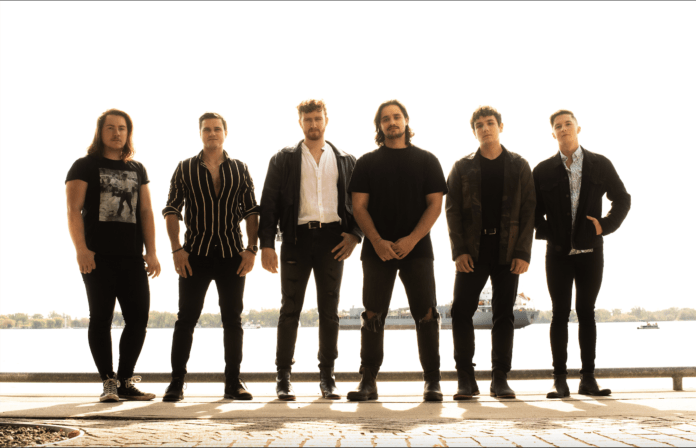 Ontario-based rockers Pacific Estate are kickin’ off 2022 with lots of new music, including the brand new single “Millennial”. We caught up with the band to chat about how they got started, the best and worst part of being in a band, and the most memorable show they’ve played.

From the Strait: Tell us about the new single, “Millennial”.

Pacific Estate: Millennial is an ode to hypocrisy. Part satire, part angst, it’s a rebuttal to the suggestion that you’re lazy and entitled because of the year you were born in. The world’s fucked up. Yea, we get that but who’s really responsible?

FTS: How did Pacific Estate get started?

Pacific Estate: Grady and I actually met when we were 10 years old. We played on a hockey team together and our parents connected us because we were both into music. After that season we didn’t see each other for 5 or 6 years but eventually ended up at the same high school. Grady just asked me one day “Are you still playing guitar?” I said yea and asked if he was still playing drums. We stole bassist Evan Catania on and guitarist Nick Lewis from two other local bands and the rest is history. 10 years later, we’ve added Pianist Owen Catania and Guitarist Zack Moore who complete Pacific Estate.

FTS: What’s the best thing about being in a band? And the worst?

Pacific Estate: The best thing about being in a band is playing live. Especially after not playing live for so long and realizing how much we took it for granted. The world is a better place with live music. There’s something unexplainable about being on stage and just commanding a crowd while they sing along to your songs. It’s the most amazing feeling I’ve ever felt.The worst part right now is just waiting. It seems like there’s a setback everyday with COVID. We had really timed things out to pick up and launch ourselves in the summer of 2020. We were all graduating university and finally able to take on the band full time and then bang COVID. It’s been a serious fork in the road, we’ve had to adapt our strategy a ton but we’re happy to finally be releasing new music.

Pacific Estate: Right now its Plans by Death Cab For Cutie. My taste is pretty broad and I listen to a ton of music, but every now and then I get stuck on an album and just can’t help myself to put it on every time I put in headphones. Plans has been that album for me since like July.

FTS: What was the most memorable show you’ve ever played?

Pacific Estate: Recency bias aside, we just played a sellout at the El Mocambo in December and which was pretty incredible. It was our first show since March of 2020, and the energy was insane from the first song to the last. Being back on stage and seeing the crowd going crazy, screaming out our songs and just vibing made everything feel normal again for the first time in a long time, and that is something I’ll never forget.

Check out “Milennial”, the latest single from Pacific Estate!